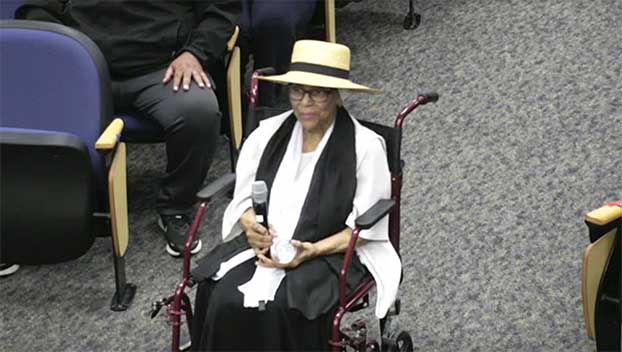 A portion of Turtle Creek Drive will soon be ceremoniously renamed after a Port Arthur resident who served the community for 92 years.

At the request of Councilman Donald Frank, the Port Arthur City Council unanimously approved the honorary renaming of the street from 9th Avenue to Stonegate Manor Apartments after Hargie Fay Jacob Savoie.

“Hargie Faye Jacob Savoie is the president of the MLK Support Group of Southeast Texas,” City Attorney Valecia Tizeno said as she read from a motion. “She was born and raised in Port Arthur, Texas, and has dedicated her life to serving her community. She is a devoted Christian, beloved wife, loving mother and grandmother.”

Tizeno also said she’s received a multitude of accolades from groups such as the NAACP of Beaumont and Port Arthur, and received the YWCA of Beaumont Justice Awards.

Savoie served on various boards such as the YMCA of Southeast Texas, St. Mary’s Hospital and the Texas Artists Museum.

She created the MLK Support Group of Southeast Texas at the request of Corretta Scott King, whom she met in 1986 in Atlanta, Georgia.

Savoie was in attendance this week to thank councilmembers for the gesture.

“Every now and then, you know you kind of get dumbfounded by some things. Even when this came to me and I was told it was going to happen, I just want to let y’all know I talked to a friend and I was dumbfounded a little bit.”

Savoie thanked her family and her husband.

“I know most everybody in Port Arthur,” she said. “When you’ve been here 92 years, you know how it is. But again, I want to thank you from the very depths of my heart to say that when I walk out my door, I’m walking out on a street of my name. And I’m so grateful.”

Savoie is one of several streets recently approved to be ceremoniously renamed.

The difference, Tizeno said, is by doing so in honor and not officially, it avoids residents from having to change their identifications and other information because of the new street name.

In September, at the request of Councilman Cal Jones, the council agreed to ceremoniously rename Grannis Avenue after Russell Getwood Sr., who served as Port Arthur’s first African-American truant officer for the Port Arthur Independent School District, as well as Bluebonnet Avenue after Rev. Samuel Joseph Sr., who led Shilo Baptist Church for more than 40 years until his death last year at the age of 82.