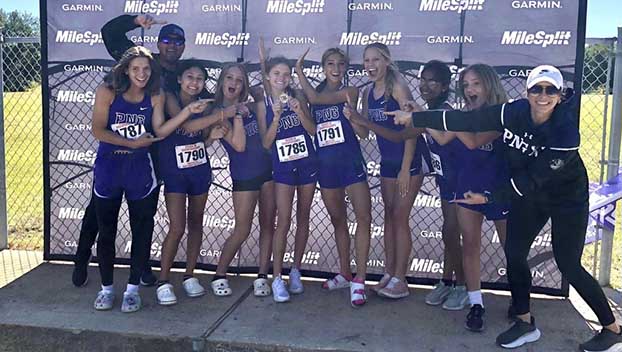 Coaches and runners surround Morgan Campbell, who came in second and will compete at the state cross country meet. (Courtesy photo)

A Port Neches-Groves freshman is state bound after qualifying at the regional cross country meet this week.

PNG had several runners attend Tuesday’s meet at Kate Barr Ross Park in Huntsville. Morgan Campbell finished with a time of 18:40, which earned second place and advances he to the state competition Nov. 5 in Round Rock.

“I thought we performed really well,” Head Coach Josh Tanner said. “We were hoping to finish 6-8, but we finished 11th as a team, which ties the best that we have ever done. Everyone ran really well.” 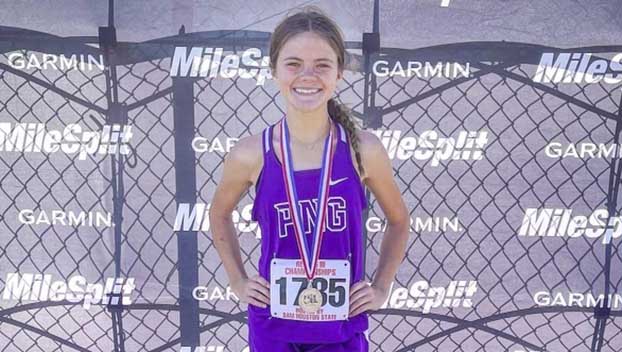 Tanner said he was proud of how Campbell ran all season.

“It was everything as coaches and her parents and herself had hoped for,” Tanner said. “Everyone in the area knew Morgan was our No. 1 girl. We all knew she would do well and we hoped she would make state. We were all nervous before the race started.”

The top-10 finishers advance to the next round and from the beginning of the race until Campbell crossed the finish line, there was little doubt she belonged.

“She was in the top three at the first 400m,” the coach said. “That pack was huge. As the race went on, the pack thinned out and she stayed up there. She and a girl from College Station were going back and forth in the woods. She edged out the two girls from College Station by a pretty good distance by finishing her kick.”

PNG junior runner and past state finalist Katherine Page finished with the next fastest time for the school at 20:53.

“She wasn’t happy with her time because she is a competitor, but I was,” Tanner said. “She improved from last year. Marlee Sonnier also ran a (personal record). Our leader did well and ran a really good race. We were up against some really tough competition.”

PNG has had two state qualifiers in the past three seasons. With both slated to be on the roster next year, Tanner said he believes the program is on an upward trajectory.

“I think we are headed the right way,” he said. “I think the popularity of 3-mile Thursday has helped. It has helped get the name out there. Success breeds more success. My hope is that some of the younger talent at the Port Neches and Groves middles schools see what these girls are doing and strive to run with them one day.”