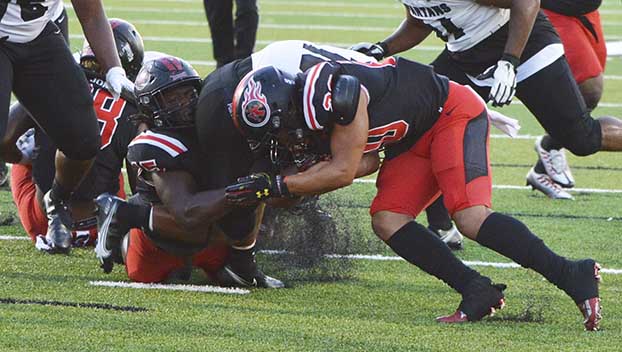 The Memorial defense is ranked No. 1 in the district in yards allowed and is a large part in why the Titans have the best turnover ratio through seven games.

Since the start of district play, Memorial’s defense has improved each week, according to Head Coach Brian Morgan. That steady increase is mainly due to players doing their respective jobs and knowing their assignments.

Morgan said senior defensive back Jayce Robertson is a perfect example of someone maximizing his potential.

“He brings an element of toughness,” Morgan said. “He is really, really intelligent. He uses his football intelligence to get by because he is not overly big. He is probably one of the smaller guys on our defense, but he has played a lot of football for us.” 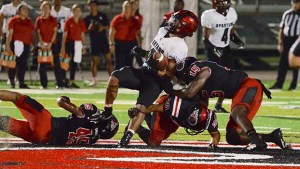 Robertson said he uses his football IQ to stay a step ahead.

“Each week, I go in with the mindset that I can be better,” Robertson said. “I just want to help Coach Morgan and Coach (Korey) Mangum. I just try to use my football knowledge to my advantage.”

Robertson plays the nickel position for the Titans, which typically is used against pass-heavy offenses, but more teams at all levels have used the position in a base defense if the person can also act as a linebacker and play the run.

Defensive coordinator Korey Mangum said Robertson has been reliable for the Titans.

“That position requires a lot,” Mangum said. “Jayce is such a naturally physical player. We love that about him, and he is smart. He knows what to do. That helps him out a lot. I love what he brings as a football player because I know he is going to come in every day and grind.”

Morgan said Robertson is also good to have in the locker room.

“He takes coaching really well,” he said. “He is fun and smart. He can be a jokester. He always has a smile on his face. You can get on him as hard as you want. He doesn’t respond negatively. He is great to be around. I wish we had a whole bunch more of him, to be honest.”

Robertson said his only goal is for the team to go as far as they can in his last season. After high school, Robertson wants to work towards becoming an accountant.