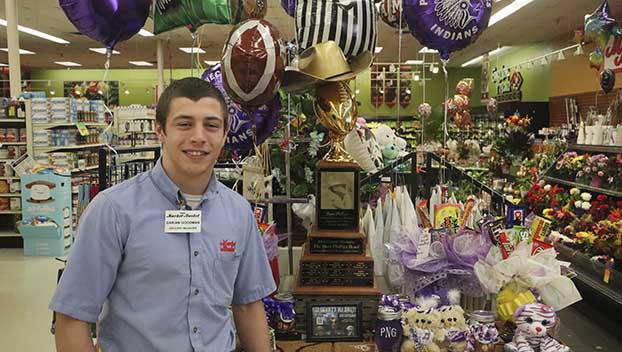 PORT NECHES — In less than two weeks, Nederland and Port Neches-Groves will battle it out for the right to hoist the Bum Phillips Bowl trophy in victory.

The trophy will be on the sideline during the game, but whether or not it gets to remain at PNG High School will be determined on the field.

While the PNG faithful hope to see the trophy in Port Neches after the clock hits all zeros, the trophy currently resides at the Market Basket less than a mile from where the game will be played.

The Bum Phillips Bowl trophy with its signature golden cowboy hat sits near the floral section at the Market Basket, located at 864 Magnolia Ave.

The location’s manager Darian Goodman is not too far removed from knowing what it is like to have the trophy held at the campus after a win. Goodman graduated from PNG in 2021. His alma mater won two out of the four years he was there.

“It is a good feeling,” Goodman said. “It has been a big part of our culture for our small towns for a while. When I went to high school at PNG, it was really awesome to see the football team hoist it around after the game. It is really good to have it in the store.”

Goodman said he enjoys the friendly rivalry between PNG and Nederland.

“It is a really cool experience,” he said. “It is cool to have a rivalry and not have a lot of bad blood going on. It is friendly and you get to see the spirit and see both towns come together for that each year.”

The rivalry dates back to 1925 and the current record stands at 52-39-7 in favor of the Indians. Nederland has won eight out of the last 12, but a recent hot streak by PNG has made them hold on to the trophy four our the last six matches.

The Port Arthur News introduced the trophy to the rivalry in 2014. Since the introduction of the trophy, the series is tied at 4-4.