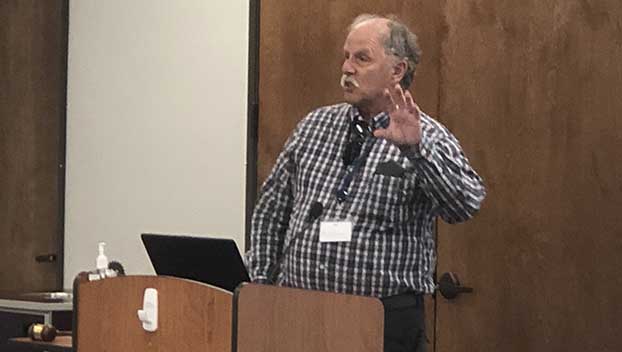 “Does anyone want to guess what these numbers mean?” he asked the crowd.

Were they tied to phone numbers? Possibly zip codes?

After he hit the next slide, audible gasps filled the room.

“They’ll tell you this is a very common thing,” he said as he spoke in a meeting room at the Port Arthur Public Library. “It’s more likely that you’ll die in the line of duty. It’s all over the place and unfortunately the reality of it is that it happens on a weekly — sometimes almost daily — basis.”

“From the telecommunications side, up until approximately five years ago, a telecommunications officer was classified as clerical,” he said of what is commonly called a dispatcher. “They weren’t recognized as being first responders. But guess who takes that first call?”

Again the screen changed, and on it were clips of articles written about firefighters who took their own lives — one while in the station, one in her car while parked in front of her supervisor’s house and another who had been facing online harassment that was dismissed.

Due to the escalating numbers, Benson said, the state created a program to assist police officers.

“The Texas Legislature passed a bill that provided mental health time off for police officers,” he said. “But they did not include firefighters, EMS or telecommunications professionals in it. Why? I don’t know.”

However, he said, first responders have begun to implement a multitude of programs that address mental health needs — recognizing the reality of it, support from leadership, culture change, investing in resources, debriefings and peer support.

The latter will soon become more regional, as Benson has met with the fire chiefs in Groves, Port Neches, Nederland and Beaumont to create a countywide support network.

“We’re in the very early stages of it now,” said Groves Fire Chief Lance Billeaud. “We said, ‘hey, this is a need, and we need to get going on it.’”

Billeaud said the joint support system would greatly benefit firefighters in the area, particularly if a firefighter doesn’t feel comfortable speaking with a co-worker but can reach out to a member of another department.

“You feel more comfortable opening up to a peer who has experienced those same things,” he said. “When you’re a first responder, you know they understand what you’re going through.”

Billeaud said, for that reason, department members keep an eye on their firefighters and look for any indication that a demeanor might be off.

“We have to see those signs and recognize that,” he said. “There are still not a lot of people that want to reach out.”

Billeaud, himself, was one earlier in his career. Following a particularly difficult call, his captain saw he was in need of assistance but he refused.

“One of the ambulance companies came in, and because of that I’m still working today in our field,” he said.

The Suicide and Crisis Lifeline is available by dialing 988. Digital chat is also available at 988lifeline.org.