No shortage of points between Memorial, Goose Creek in homecoming contest 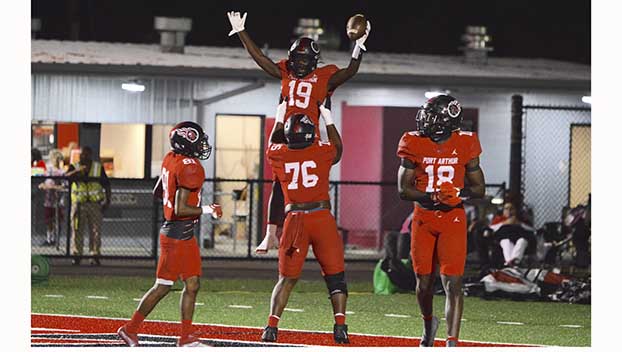 Memorial has an embarrassment of riches at the skill positions, and that was on full display Friday night as the 4th-ranked Titans routed Goose Creek Memorial 63-13 in District 8-5A Division I action at Memorial Stadium on Homecoming night.

“We did what we were supposed to do,” said Memorial coach Brian Morgan after the game. “We were better on paper and on film. We came out and executed and played like we’re supposed to.”

After Caleb Goodie torched LaPorte last week, it was Ja’Quan Holmes who turned in a stellar game Friday. He caught six passes for 157 yards. He had touchdown receptions of 54, 60 and 6 yards.

Fellow receiver Najiya Green also turned in a solid night with 87 yards on three catches. He had TD receptions of 52 and 30 yards. Goodie hauled in two passes for 45 yards facing double coverage most of the night. 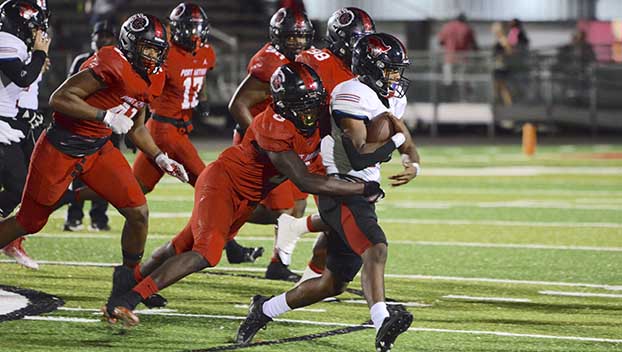 “They (GC Memorial) played a bunch of man defense, and we feel like we have a bunch of talented receivers,” said Morgan on the team’s passing success. “They double covered Goodie, so he didn’t have a ton of yards. But if you’re going to do that, then we had better matchups on the other side. Holmes had a good night.”

Leading 28-6 to start the third quarter, the Titans offense picked up where they left off in the first half. Memorial scored on a two-play drive on its second possession of the third quarter.

Wilson hit Holmes for a 60-yard scoring strike to push the lead to 35-6. The drive was set up by a Jelani Chevalier interception.

Memorial (7-0, 5-0) put the game out of reach with four touchdowns in the fourth quarter. Playing mostly backups at that point, the Titans turned to the ground game. Amante Martin scored on an 18-yard TD run.

It was Joshua Neal’s turn in the back field for the final three drives. Neal had touchdown runs of 2 and 12 yards. Stoever hit Payton Chaney for 54 yards to set up Neal’s 2-yard TD run. Neal had a 49-yard run that preceded his 12-yard TD run. He finished with a game-high 85 yards on nine carries.

GC Memorial (1-6, 0-5) scored early in the fourth quarter on a 2-yard touchdown run by Jalen Green. The nine-play scoring drive was set up by a Nicholas Samuel interception of Stoever.

The Titans closed out the scoring on a 6-yard TD pass from Stoever to Holmes. That scoring drive was set up by a blocked punt.

“Defense played well, like they were supposed to,” said Morgan. “This is a game that we could have easily just been kids and come out and not play good early just because you’ve seen the film. But the kids responded well. We talked about playing to our standard and they did a good job of that tonight.”

Memorial started the scoring on Baker’s 39-yard touchdown run. The Titans defense stuffed the Patriots on the game’s opening possession. A 22-yard punt led to good field position at the GC Memorial 40.

The Titans looked poised to increase their lead, but Holmes fumbled the ball after a 15-yard reception. The defense forced a quick three-and-out to give the ball back to the Memorial offense.

Memorial didn’t waste the opportunity this time. Baker started the drive with a 20-yard run. Four plays later, Wilson hit Green on a 52-yard scoring strike to give the Titans a 14-0 lead with 3:54 left in the first quarter. Green broke several tackles in fighting his way to the end zone.

Following another three-and-out by the Patriots, the Titans went back to their quick strike offense. This time it was Holmes hauling in a 54-yard touchdown pass from Wilson. Memorial extended its lead to 21-0 with 2:45 left in the first quarter.

It was a Memorial miscue that lead to the Patriots only score of the first half. Nolan White was deep in his own end set to return a punt. However, in trying to catch the punt, the ball grazed off his fingertips and bounced into the end zone which was recovered by GC Memorial for a touchdown. That made the score 21-6 as the extra point was no good.

Memorial closed out the first half scoring with a late drive. Stoever, who was in at quarterback for the injured Wilson, hit Goodie on a 16-yard completion to get the drive started. Those two hooked up again on the next play for a 29-yard completion.

Following a 5-yard Baker run, Stoever hit Green on a 30-yard touchdown pass. That made the score 28-6 with 1:30 left and that’s how the teams went into the locker room at halftime.

The play of the game was… Ja’coryn Baker’s 39-yard touchdown run. He scored the game’s first touchdown and that set the tone for what the night was going to be like for the Titans.

The game ball goes to… Ja’Quan Holmes who led all receivers with 157 yards on six catches. He hauled in three touchdowns of 54, 60 and 6 yards. He was also very productive in the return game with several good kickoff returns that put the Titans in good field position.

Key stats… Ja’coryn Baker rushed for 68 yards on five carries. The Titans passed for 355 yards and rushed for 169 as a team. Payton Chaney had two catches for 55 yards. Jalen Green led GC Memorial with 45 yards rushing on 28 carries and 1 TD. Avery Thomas completed 4 of 19 passes for 55 yards. As a team, GC Memorial was held to just 97 yards of total offense.

Up next… Memorial hits the road for a game at Baytown Lee next Friday. Kickoff is slated for 7 p.m. at Stallworth Stadium. Goose Creek Memorial returns home to host New Caney Porter Thursday at 7 p.m.