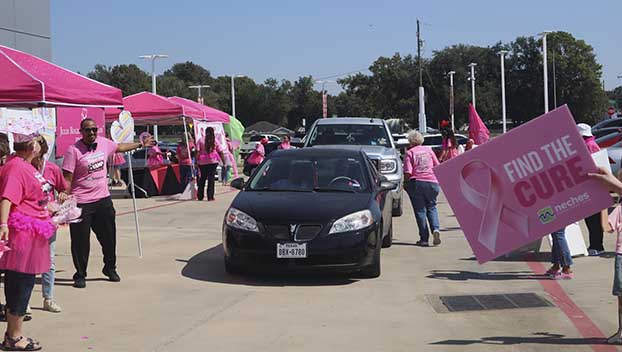 Cars drive through the pink parade at Philpott Toyota this month during a Breast Cancer Awareness celebration. (Chris Moore/The News)

We’re about to get very personal.

In fact, for some of you, it might be a bit too personal.

But it was only through the brave stories of other women who shared similar information that I can even write this. And had that not happened, I easily could have become one of the approximate 264,000 women who are diagnosed each year with breast cancer without time to treat it properly.

Statistically, one in every eight women will be diagnosed at some point in their lives.

So for that reason, I am volunteering to talk about my personal business in hopes it helps at least one person in return.

Last year I turned 40, and during my annual physical in September, my doctor scheduled my first mammogram.

I work in the news business; of course I knew it would become necessary once I hit a certain age. But hearing it terrified me, because, truth be told, I grew up believing it was terrifying.

When I left the doctor’s office that day and called my mother, and she said, “did they not have vice grips in the office to do it right there?” I laughed, but I did so as my stomach began to knot and my pulse began to race.

My late grandmother often made jokes such as, “it would be just as effective if I slammed them in the refrigerator door myself” or “next month I’m having my breasts run over by an 18-wheeler.”

They were comments heard from an elementary school age. If I remember correctly, my grandmother even had a refrigerator magnet that made a similar joke.

While technology obviously advanced a great deal in those 30-plus years, I spent most of my life believing mammograms were basically voluntary torture.

So when the day came early last October, I didn’t go. I convinced myself I was too young anyway, and skipping a year wouldn’t hurt.

But then The Port Arthur News began our annual profiles on breast cancer survivors, as we are doing now in our weekend editions.

These women were my age at diagnosis. None knew before the test.

I spoke to each as I do almost everyone I profile — like a friend. I shared my fear and admitted I had skipped mine.

They all said the same thing: it isn’t bad.

But the survivor who lost her mother caused me to pick up the phone and reschedule my appointment when she said, “It doesn’t hurt as much as cancer.”

I arrived Nov. 4, sick to my stomach but ready to get the “torture” over with.

After the first half was done, I asked the radiologist, “Seriously? That is what I’ve been afraid of?” She laughed and said, “Yup.”

I’ve had hangnails that bothered me more.

And while I understand each person deals with a different level of pain tolerance, I can say with all honesty I’ve felt more pain accidentally bumping into walls. And the process itself lasted only a couple of minutes. There were no vice grips, refrigerator doors or 18-wheelers involved.

But having written the stories I did and having read those written by my colleagues, I left as concerned about the results as I was about the test.

Thankfully the anxiety was short lived, as I received the news that night through my online patient portal.

“Your mammogram was negative for malignancy, benign findings. Repeat mammogram in one year.”

And with one small message, a lifetime of worry had been wiped away.

I still stand a chance of becoming one of those eight women who will be diagnosed at some point — but it won’t be from fear of getting the test.

I’ll be scheduling the second one next week.

If you are a woman 40 or older in need of a mammogram but feel medically underserved or uninsured, please reach out to Gift of Life at 409-833-3663. Since its inception in 1994, they have helped provide free mammograms to more than 40,000 women — 267 of which were diagnosed.

Or, if you are looking for a way to help your community, consider reaching out and offering a donation.

Encourage the women in your life to continue annual testing.

Knowing one in eight women will statistically face this disease, think of the eight most important women in your life. Are you willing to draw the proverbial straw?