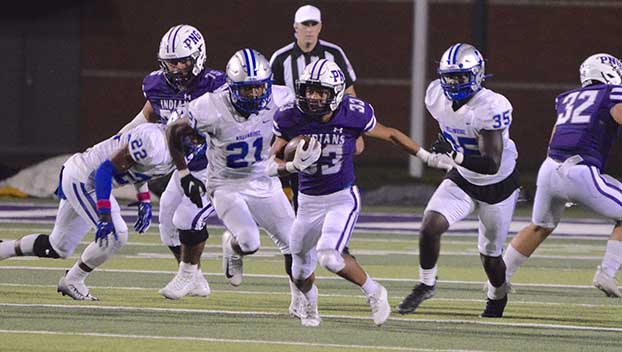 PORT NECHES — The Port Neches-Groves football team could be in for a high-flying homecoming game as the Dayton Broncos come to town.

The game has the potential to be a high-scoring contest as both teams rank in the top-three in the district for offense, with Dayton averaging 438 yards per game to PNG’s 369.

The Broncos’ high-powered offense is led by running back Vernon Harrison, who leads the district with 91 carries for 748 yards and 14 touchdowns.

Carson Horton leads the Dayton passing attack and is second in the district in passing yards with 1,166, plus 13 touchdowns and two interceptions.

The Broncos will also see a formidable offense. The Dayton defense is ranked second in the district, but PNG’s offense features one of the more balanced attacks with 1,307 yards rushing and 907 yards passing.

“It has been something we have tried to do, but it is really a perfect marriage of this coaching staff,” PNG offensive coordinator Cade McCrary said of the team’s balanced approach. “I have been in places before like Lake Travis and Southlake Carroll, where we just chucked the ball all over the field. Getting here and working with the guys I have worked with has been great.”

McCrary gave credit to offensive line coach Charlie Feller and receivers coach Collin Gizzi for their input on the offense.

“We all have these ideas and put in a system that works for us,” McCrary said. “It has been great for us.”

The OC said the offense is unpredictable due to how much success the run and pass games have been. McCrary said the team is not afraid to call run plays in third-and-long situations because coaches feel like the team can convert the first down more times than not.

The team has also found ways to efficiently utilize playmakers.

Receiver Chance Prosperie made a name for himself last year as a consistent deep threat and has continued in that role. He is second in the district with 25 catches for 363 yards and four touchdowns.

PNG also likes to find ways to get Shea Adams involved. He has lined up most as a receiver, where he caught 19 passes for 300 yards and two touchdowns. PNG also lines him up at quarterback for a “wildcat” look, where he has the ability to throw or run.

Adams has 34 carries for 263 yards and 10 rushing touchdowns on the season.

“Shea is the Swiss army knife for us,” McCrary said. “He is a big, strong kid. He is one of the smartest kids in the program, as well. That helps big time. It helps us with teams not really knowing where he is going to be.”

Despite going against a high-powered offense this week, McCrary said the offense doesn’t go into games with the mindset that they will have to score a certain amount of points.

“We want to score as much as possible, and our defense wants to hold them to as few points as possible,” he said.

Dayton’s defense is a bit different from what the district typically provides. McCrary said the Broncos run what is typically called a 3-3 stack or broken stack defense, which is similar to what Iowa State runs with a three-safety look.

The base defense is typically used to slow down spread offenses but can be vulnerable to a good running football team, especially when the offensive line is as massive as PNG’s.