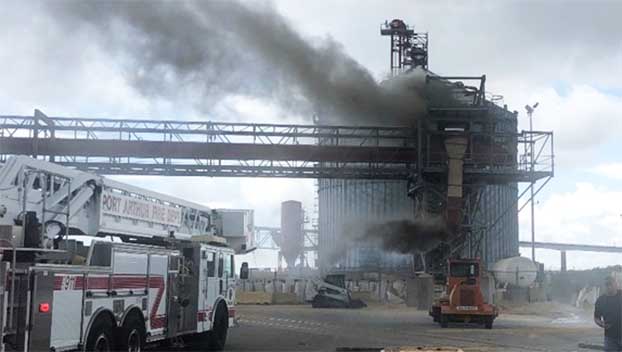 A fire on the exterior conveyor system at the Woodville Pellets Plant near the Port of Port Arthur was reported at approximately 11:46 a.m. Wednesday.

Port Arthur Fire Department crews responded and found a fire with light grey smoke located at the top of the conveyor in the bin area used to transfer products to ships for transport.

Extinguishment was initiated to limit any fire extension to the silos that contain product.

The fire was reported to have been knocked down at approximately 12:06 p.m.

The Fire Marshal’s Office issued a Stop Work Order due to the company not following code requirements. The facility will not be allowed to bring in any new product until actions are taken to comply with code requirements.

A PAFD crew remained on the scene and attempted to complete the extinguishment.

The fire continued to smolder and reignited at 1:32 p.m.

A full assignment responded and found heavy fire and smoke in the same area of the conveyor bin up top. An attack was initiated again using Ladder 1 to access the fire.

Some smoke was noted on the conveyor belt closer to the silo, with no reported extension in the silo.

One firefighter suffered overheating from the extended work process and high humidity. Acadian responded to provide medical assessment and standby during the incident.

The Texas Commission on Environmental Quality was contacted after the initial incident due to the accumulation of products that can enter the waterway, creating hazards in the waterway.

PAFD crews will remain on the scene while completing an extensive fire overhaul and spot fire extinguishment.