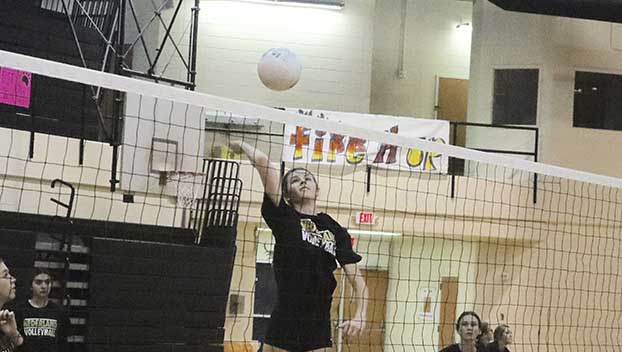 With five games left in the season, Nederland volleyball is square in the playoff mix.

Nederland enters the week with a 24-12 record (6-3 in district play) with a big contest against Crosby on the schedule for Friday.

The Bulldogs close out the season with Baytown Lee Oct. 18, at Memorial Oct. 21 and play their final game at home against Barbers Hill Oct. 25.

Nederland is coming off a Mid County Madness sweep against Port Neches-Groves, putting the Bulldogs in third place in the district race.

“We will always take a win in district and against PNG,” Head Coach Allie Crommett said. “In both games against PNG, I was really happy with the performance. But if we can walk away with a win, an ugly win is better than a pretty loss.”

To start the week, the playoff standings had Barbers Hill in first place with Baytown Sterling, Nederland and Crosby trailing.

Nederland needs to beat Crosby Friday in order to keep control of the third seed. Crommett said she is looking to see her team improve in certain areas ahead of the playoff push.

“We try to dial in on certain things in practice,” she said. “After Barbers Hill, our serve-receive was really weak. We dialed in on that, but we did so much serve-receive that we were better, but our offense was lacking. We are having a hard time putting everything together.”

One of the defining characteristics of the Nederland team has been the girls’ resiliency. The team started the season 1-7, before turning it around. Crommett said one of the team’s best games came in a loss against Sterling, where the team fell behind 0-2.

“We started off really slow,” she said. “The sets weren’t bad. We just weren’t doing anything offensively. We were waiting for them to make a mistake. The atmosphere over there was very loud and it was hard to focus. I told them that we could either mail it in or shut people up for the next three sets.”

The Bulldogs fought back to even up the set count at 2-2 before falling in the fifth set.

“For me, that was probably the most I have seen them fight for a win,” the coach said.

Senior Ava Whitehead said the team has used doubt as fuel for the season.

“I think we have really good people and we have been able to push through after we get down,” Whitehead said. “We don’t bring each other down. We just keep on trying hard.”

Audrey Johnson said the team’s chemistry has improved throughout the long season.

“I think we have a lot of potential and we want to go further than the first round,” Johnson said. “I think from the beginning, people didn’t think we would be as good because we lost so many seniors from last year. We didn’t have as much height on the team. We had that mentality of proving people wrong. The love we have for the sport and the competitiveness made us want to prove people wrong.”