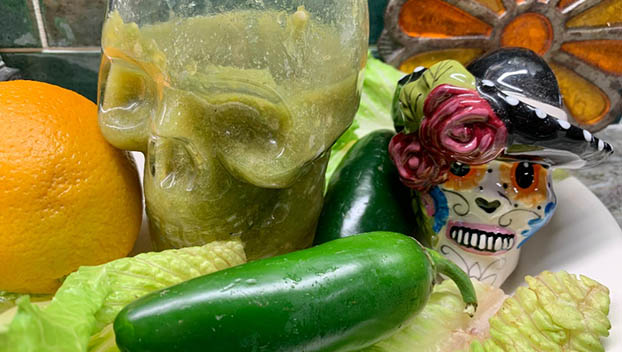 Does hot sauce scare you? Proceed with caution. (Darragh Doiron/Special to The News)

Does your fall décor feature sunflowers, burlap and orange leaves? Or super-scary-creepy things for All Hallow’s Eve?

We do things differently. I’ve got a bunch of shiny discarded CDs making beautiful rainbows as they spin from a magnolia tree. It’s a fall tradition that seems to amuse and get compliments from neighbors walking their dogs.

On the inside, it’s a different story. Sugar skulls in the Dia De Los Muertos tradition adorn my house from candles and towels to salt and pepper shakers. People give me these colorful pieces of Mexican heritage.

That’s how I got hot sauce in a skull jar. My original intent was to go through the store-bought stuff so I could always make my own and keep it in the jar.

It’s a warning to others: I like it hot. I usually go red, but I’ve gone green of late.

One hot green version: Simply cut up fresh jalapenos and run them through the blender with garlic and a little vinegar. The green stuff can be mixed in to yogurt to cool it down. Play around with that. Have fun. Don’t be scared.

Monkeys and Sea Creatures – Laid-back monkeys, skulls and sea creatures announce some tasty canned beverages that will take you into the season. No reason to say goodbye to island flavors in our mild winter area.

Osena is spiked coconut water cocktail as close as a pop of the top Lush Dragon Fruit, Exotic Pineapple and Pure Original are smooth flavors that allow you 100 calories of beachy feeling. The electrolytes just come naturally. Cute little monkeys are sharing a coconut drink with straws on the label. Try @drinkosena on social media.

Our friends at Fire Dept. Coffee have always meant businesses. The skull in a fire hat just calls me in for some adventure. Now Nitro-Charged Shellback Espresso with a dual-trident armed sea king is taking no prisoners.

There’s no alcohol in Spirit-Infused Irish Coffee and Nitro Latte is right in there with the new cans that aren’t for novice coffee drinkers. It’s in good fun and based on the concept our fire fighters need to stay alert. Read at firedeptcoffee.com how efforts help those hurt on the job.

Soil to shelf and not sketchy – I truly enjoyed a meal of Chi, which is “fake meat” to haters. To Culinary Thrill Seekers looking for new flavors and some healthy fun, I say give this 100 percent plant-based meat a go.

It impressed a guest who found the good texture and flavor “familiar.” He guessed that nuts played a role in the good texture. I served it with tortilla and beans and we all felt good about our choices.

It cooks in 4 minutes and the box says there’s “No Sketchy Stuff” like genetic engineering and artificial flavors or dyes. I can’t wait to see how a box of  CHI-rizo upgrades my next Taco Tuesday. Italian Herb comes after that. Join in the fun from chifoods.us.

Darragh Doiron is a Port Arthur area foodie looking for her one sweater she pulls out each of our brief autumn seasons. Share your foodie finds with her at darraghcastillo@icloud.com.