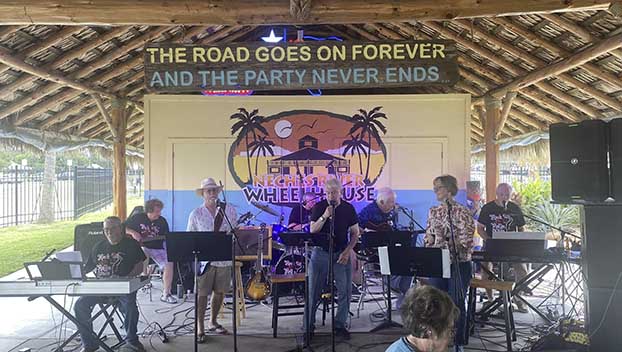 GROVES — When Groves resident and local optometrist Barry Davis decided to create the Rollin Bones band three years ago, he likely didn’t realize he was naming a self-fulfilling prophecy as the group of local musicians have continued rolling up the list of well-known local bands.

And they’ll be showcasing their eclectic sounds of music from the 50s to the 80s Friday/Oct. 14 at the Groves Pecan Festival.

“I am thrilled to death, as is the rest of the band,” Davis said of their upcoming performance. “All eight of us are equally enthusiastic about what we do. We practice every week getting ready for these shows, and they’re coming more frequently.”

Prior to assembling the band, Davis never played a musical instrument. But as he accompanies the group on the keyboard, one would never know.

“Now I understand how entertainers feel when they get on the stage,” he said. “You can’t be shy, you just got to get out there. I never thought I’d be doing this at 80 years old.”

Their first public show was at Taste of Gumbo in Port Arthur, and later they played at a few class reunions. One Sunday they were asked to play at the Neches River Wheelhouse in Port Neches and drew such a crowd they’ve been invited back multiple times. And in July they were the featured entertainment at Taste of Summer in Port Arthur.

“I go by who is up and coming,” he said about picking the featured entertainment each year. “They reached out to us, and I looked them up and thought they had some great stuff. I can’t wait to hear them play.”

Davis said those in attendance will hear music they know and love.

“They can expect a very high energy musical show with a band that is just so enthusiastic,” he said. “We’re happy to be here and we’re happy for the patrons of the Pecan Festival to come hear us.”

Rollin Bones will play from 7-10 p.m. at the Lee Rodgers Pavilion.