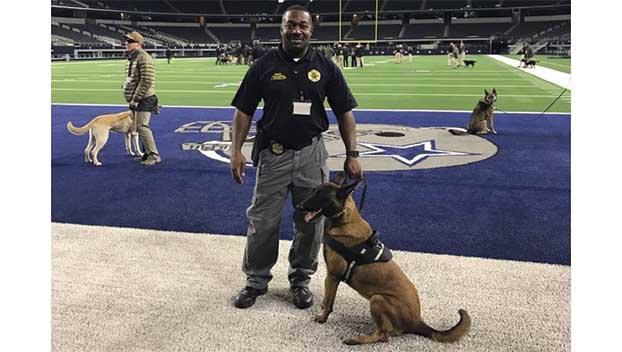 The hardest working female in Southeast Texas and beyond can normally be found in Port Arthur.

She’s driven. She lives to work. She doesn’t make mistakes. And she understands four foreign languages.

She also happens to be able to smell and detect more than 2,000 odors at barely 6 years old.

But don’t let Avispa’s beauty fool you; her name does, after all, mean “wasp” in Spanish.

“My K-9, she’s very good,” said Port Arthur Fire Department Captain and Deputy Fire Marshal Antonio Mitchell. “She’s very systematic; she’s very thorough. I’ve had two male dogs prior to this female, and the female is hands and feet and everything above the male dogs.”

Avispa, a Belgian Malinois, is essentially the only bomb dog in the area from Baytown up to Lufkin and Tyler. And therefore a majority of Southeast Texas relies on Mitchell and his K-9 in the event of a bomb threat or concern of explosives.

Which is fortunate for Avispa, as more than one miss means she would be released from the program. 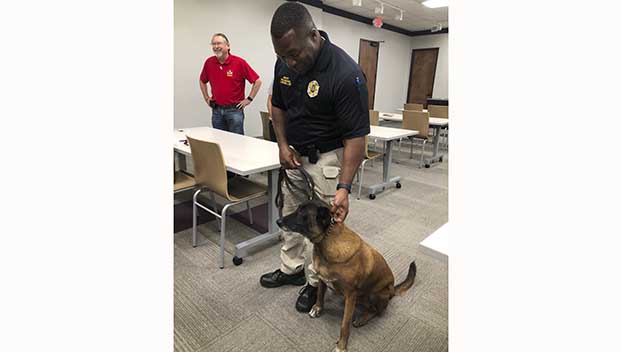 Mitchell, who has spent nearly 18 years with PAFD, has been a K-9 handler for 11 years. In addition to handling his own dog, he trains others in explosives and drugs.

But K-9s are trained in one area only and never cross-trained in others to help ensure accuracy.

“If a dog misses some drugs, is it really that big of a deal? But if a dog misses a bomb in a movie theater, that’s a bad day,” the deputy fire marshal said.

Avispa, who will be 7 next month, was purchased by the City of Port Arthur for $10,000. After three months of training with the Bureau of Alcohol, Tobacco, Firearms and Explosives in Dallas, she and her handler returned to her new home, where Mitchell quickly learned how intelligent she was.

“This dog is so smart. She can learn something in about 30 minutes,” he said. “When I first got her and got her home — we had been in school for three months. I come home the very first day. My wife wanted to go do something, so I lifted the latch up and put her in the kennel. I come home and it’s like, ‘where’s my dog?’ She had learned how to lift (the latch) and get out.”

Belgian Malinois spend 80 percent of their lives in a kennel, Mitchell said, as their nature is to be in one. She stays in her kennel unless working, ready for her next assignment.

“We don’t have a buddy deal,” Mitchell said. “I don’t play with her or rub her a lot. I don’t interact with her a lot unless we’re working. That’s to keep her drive. So when she does something good, if she finds something, I play with her and show her the affection that she doesn’t get all of the time.”

She receives commands in Spanish, German, Dutch and primarily Czech as it is a rarely known language.

But, when asked if he retired, would she go to another handler, the longtime PAFD member was quick to say, “that’s my baby.”

Generally, when a K-9 handler or K-9 retires, the dog is sold to the handler for $1, after which it becomes a family pet.

“She travels with me,” Mitchell said. “Everywhere I go, she’s with me. She’s my responsibility. The dog is actually owned by the city…but she’s not going to do anything without me. So I take care of everything. When I travel she either goes with me or I have to find a babysitter.”