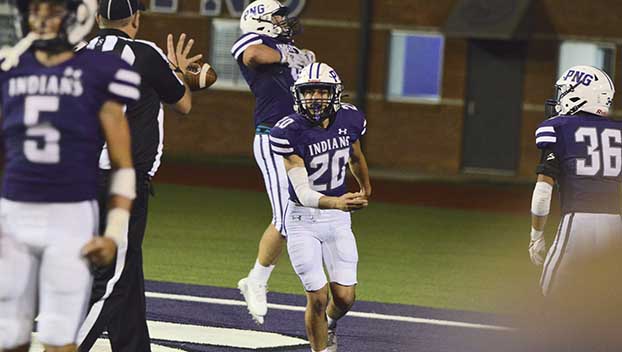 Last week, junior Kameron Droddy made his first start for Port Neches-Groves against Texas City in a game PNG needed to win in order to keep a shot at the district championship alive.

The team was also trying to prevent back-to-back loses after falling to Fort Bend Marshall the previous week.

After a pair of interceptions by the offense, PNG was sputtering, already down 7-0 with the ball in Texas City’s hands.

The Stingarees had the ball deep in their own territory when the quarterback tried to throw a quick curl route toward the flat, only to be picked off by Droddy, who was able to walk into the end zone untouched for 22 yards to tie the game halfway through the second quarter.

The play sparked the PNG sideline and ignited the home crowd in the turning point.

“Throughout the year, we have been trying to find the right pieces and find guys that can do what we are trying to do,” PNG Head Coach Jeff Joseph said. “We had some guys that were beat up and we have had to move some people around. Kameron has stayed consistent. He is a guy that you can rely on.” 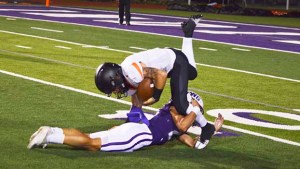 That trust in Droddy resulted in one of the biggest plays of the game and the young season.

Replays show Droddy was playing safety and rolled down toward the line of scrimmage when he read the throw and jumped the route.

“He has a good feel, is savvy and makes plays,” Joseph said. “He has good timing. He also has really good instincts for where the ball is going.”

“It was great to see,” the defensive coordinator said. “He is such a good kid. It was good to see him have some success. He has backed up both safeties all year. We had to shuffle some people around and he made the most of it.”

Coaches often talk about the importance of building depth throughout the season, especially in a sport like football, where the physical toll can weigh on the body.

Droddy’s play proved to the coaching staff what they already felt about how much they can relay on the junior down the road.

“We had several starters out that game and several stepped up and played really, really well,” McDaniel said. “It is huge when those guys start coming back, knowing you have people with experience, who can step in and keep that level up. Kameron, specifically, allows us to shuffle people in the secondary and extend out depth even more.”

“I love being around him,” he said. “He is a funny and smart kid. He works hard in school. My son is always up around the program a lot, and I want my son to be around him. I want him to look up to him. He is a great role model.”