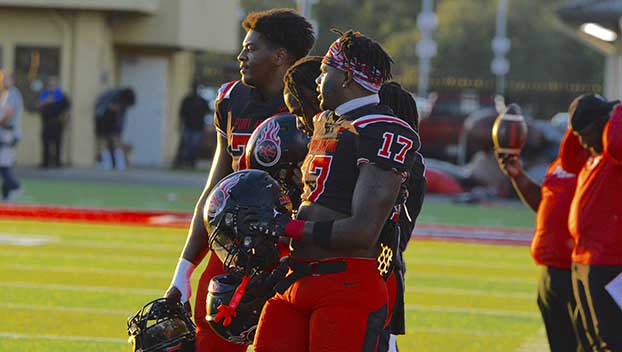 The Titans will play Kingwood Park next. (Chris Moore/The News)

LA PORTE – Senior Caleb Goodie put on a show for the Titans, both catching the ball and in the return game, leading Memorial to a convincing 54-34 win over La Porte in District 8-5A Division I action Friday night at Bulldog Stadium.

“I thought we made some improvements,” said Memorial coach Brian Morgan. “It’s hard to handle that particular offense. You just don’t see it very often. Practicing for it is tough and we were a little banged up in practice this week.”

Goodie accounted for four total touchdowns on the night. He had touchdown catches of 21 and 55 yards and had kickoff returns for touchdowns of 95 and 80. For the game, he caught six passes for 106 yards.

“Offensively, I thought it was good to see us spread the ball around,” said Morgan. “That was a key coming into the game and I thought we did a good job.

Leading 47-28 to start the second half, Memorial put the only points on the board in the third quarter. The Titans put together a methodical 11-play drive that featured only one pass, which was an 18-yard completion from Wilson to Ja’Quan Holmes. The ground-heavy drive was capped by a 1-yard TD run by Amante Martin to push the Titan’s lead to 54-28.

La Porte (4-3, 3-2) put together its only scoring drive of the second half early in the fourth quarter. A 39-yard completion from Jhamoud Jackson to Brixton Soape was the big play. Landon Kay capped the drive with a 7-yard TD run on fourth-and-goal to make the score 54-34 with 9:46 left in the game.

“We had a lot of explosive plays,” said Morgan about his special teams. “In our kickoff return unit, we have multiple guys back there that are really good with the ball in their hands. Obviously, Goodie is really talented, but (Ja’Quan) Holmes had a good return and all those guys made really good decisions with the ball. Our kickoff coverage team also did a good job. They have a really good returner and our kickoff team played lights out.”

Memorial (6-0, 4-0) took the opening kickoff and marched down the field for the game’s first score. It was a prelude to a big offensive first half for the Titans. The 12-play drive was capped by a Wilson to Goodie 21-yard scoring strike to give the Titans a quick 7-0 lead.

La Porte answered right back with a scoring drive of its own. Kobie Garrett capped the drive with a 1-yard TD plunge to tie the game at 7-7 with 5:26 left in the first quarter. Garrett also had a run of 36 yards on the drive.

Goodie returned the ensuing kickoff 95 yards for a touchdown as the Titans reclaimed the lead at 14-7.

Once again, La Porte answered right back with another scoring drive. Garrett ripped off a 38-yard run to the Titans 35. Garrett scored four plays later on a 31-yard TD run on fourth-and-six to tie the game at 14-14.

Memorial struck back with a quick five-play scoring drive. Wilson hit Ja’coryn Baker on a 31-yard scoring strike. The extra point was blocked to put give the Titans a 20-14 lead with 1:13 left in the first quarter.

Memorial’s defense came up big on the Bulldogs next possession. The Titans hit Ricky Sandolph in the backfield, causing him to fumble. After a mad scramble, Memorial’s Harvey Jones recovered the fumble in the end zone for a touchdown to put the Titans up 26-14. The extra point was no good.

The Bulldogs kept the pressure on the Titans. Tyresse Barnes capped seven-play drive with a 17-yard TD run as La Porte pulled to within five at 26-21 with 9:21 left in the second quarter.

It didn’t take long for the Titans to answer back. Wilson hit Goodie on a 55-yard TD pass as Memorial extended its lead to 33-21 with 8:33 left in the second quarter.

The Titans defense forced La Porte to punt, which went 30 yards. Taking over in Bulldogs territory at the 46, Memorial put together a quick scoring drive. Holmes capped the drive with a 35-yard TD reception from Wilson to push the Titans lead to 40-21 with 2:33 left in the first half.

La Porte was able to put together a scoring drive before the end of the first half. Jhamoud Jackson hit Caden Hisatake for a 54-yard completion to the Memorial 23. Kay scored two plays later on a 12-yard TD run to make the score 40-28.

For the second time in the first half, Goodie returned a kickoff for a touchdown. This time it was an 80-yard return to cap the first half scoring. Memorial went into the locker room at halftime with a 47-28 lead.

The play of the game was…
Harvey Jones’ fumble recovery in the end zone. After the two teams exchanged a pair of early touchdowns, Jones’ recovery gave the Titans the lead for good.

The game ball goes to…
Senior wide receiver Caleb Goodie who produced four total touchdowns for the Titans. He had touchdown receptions of 21 and 55 yards. He also returned two kickoffs for touchdowns, covering 95 and 80 yards.

Up next…
Memorial returns home to host Goose Creek Memorial next Friday. Kickoff is slated for 7 p.m. LaPorte hits the road next Friday for a 7 p.m. game at New Caney Porter.