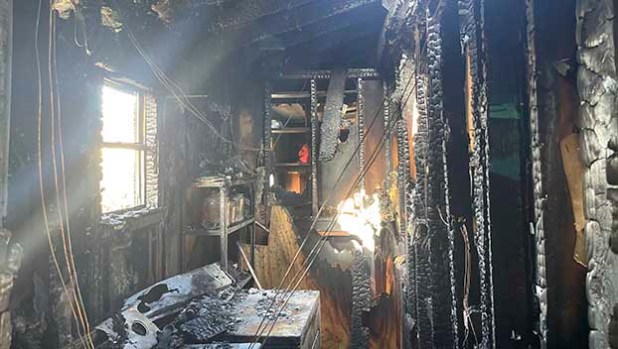 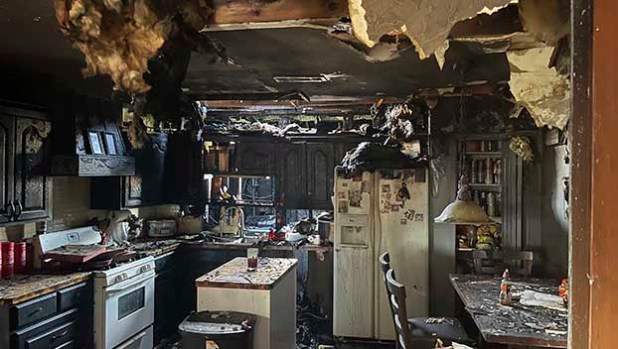 The Lafleurs had just began renovating the week before following damage from Hurricane Laura. (Courtesy photo) 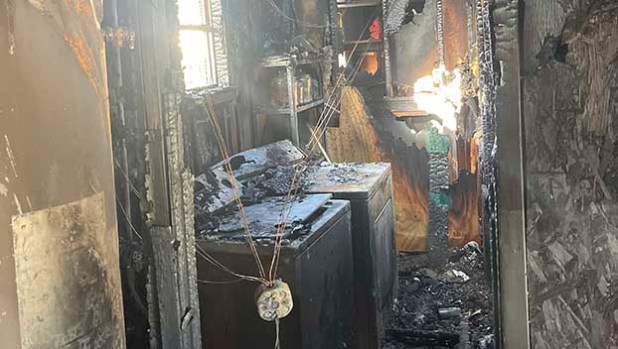 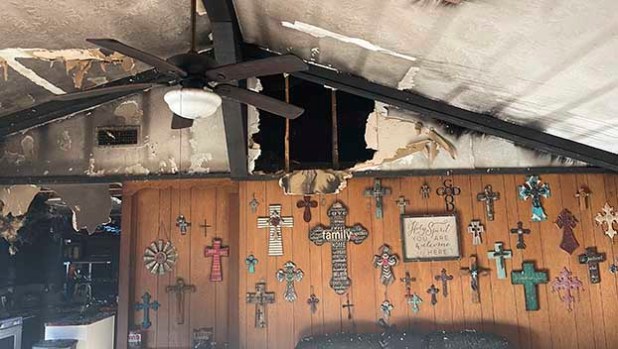 The residence housed the couple and their eight children, ages one through 12. (Courtesy photo) 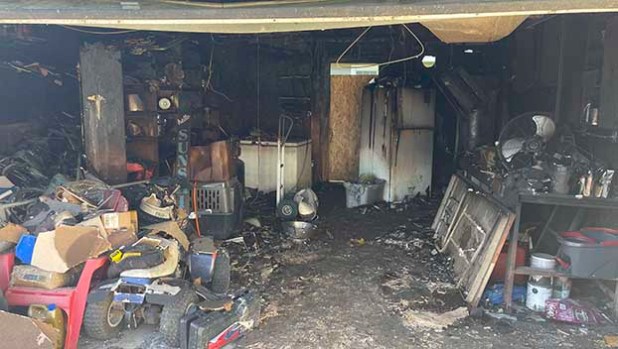 The fire began at about 5 p.m. in the garage. (Courtesy photo)

While the family sifted through piles of donated clothes at his mother’s Port Acres home Tuesday, Dylan Lafleur held up a picture of the house he recently lost to a fire and said he was trying to find some comedy in the tragedy.

Both were caused by a fire in their Central Gardens home that broke out at approximately 5 p.m. Sunday, leaving the couple with eight children essentially homeless.

“The fire department is saying it was an electrical fire,” Lafleur said. “It started in the washroom and then it just took off. The garage is burnt. The bedrooms are burnt. Basically everything on the left side of my house is burnt, and everything on the right was damaged by water and smoke.”

And, his mother Misti Johnson pointed out, the cathedral ceilings in the home are gone.

The parents of the children ages 1 through 12 didn’t just lose their home, but also a large portion of their income as Lafleur’s wife had been running a state-registered daycare from the residence.

And the structure itself, in a sense, is a family heirloom.

“I was an only child that grew up in that house,” Johnson said. “My dad built that house that caught on fire. And then we lost this house in Hurricane Rita; so me, my husband, and all four of my kids had to move into that house with my parents for almost five years while we were redoing this one.”

Her father, Ronnie Trahan, died in 2015 at the age of 66. But prior to his death, he had built the now-destroyed house on Dorothy Drive, along with many others in the area. The former employee of Ritter Lumber and then the Nederland Independent School District had also once been named Mr. Nederland.

So it seemed right, Johnson said, for her son to take on the house that had been a part of the family for so long.

That house note, along with the other bills, remain even though the family cannot reside there. And because of insurance claims that resulted from previous weather events, they’re fighting to get the house taken care of. When Hurricane Laura grazed the area two years ago, the Lafleurs had trees fall on their house.

But they were able to move forward with renovations recently.

“They had just finished Thursday with doing the outside and the roof,” he said. “They finished Saturday doing my fence. And they were supposed to start painting and doing our rooms on the inside Monday.”

When the fire started Sunday, at first they thought little of it, as drivers often spin their tires on the road, creating the smell of smoke.

“It’s nothing out of the ordinary,” Lafleur said. “And we were sitting on the couch when (Kayla) said, “okay, I really smell smoke.’ So I got up to walk outside to see if I could see someone burning while turning around, and there was smoke coming off my roof.”

He first went inside and told his wife to get his kids out of the house. At the time, only four were home. Then he started trying to disconnect utility wires.

“When I opened my garage door, my whole garage was black,” he said. “And within five or 10 minutes, you couldn’t see the house — there was so much smoke.”

His mother said she was at least thankful for the timing.

“I’m glad all of the kids weren’t there when it happened, and I’m so grateful it didn’t happen at night while they were sleeping,” Johnson said. “He said he would have died getting the kids out.”

But she immediately went to work, putting posts on social media asking for donations of clothes and things the family of 10 could use.

Clothing donations began to pour in — to the point the family no longer needs more. But immediate needs include gift certificates to H-E-B and Walmart, as Johnson said they can find anything they need there. And they are also in need of monetary donations, as the house fire hasn’t stopped the house payment or any subsequent bills.

A facility suited for Lafluer’s wife to hold her daycare is also in need, as that is a primary source of income for the family.

And they are seeking bunk beds for the children, as theirs were ruined.

Gift card and monetary donations can be dropped off at 2490 66th Street in Port Arthur. Donations can also be made through PayPal to @mdl446 or through the GoFundMe by clicking here.