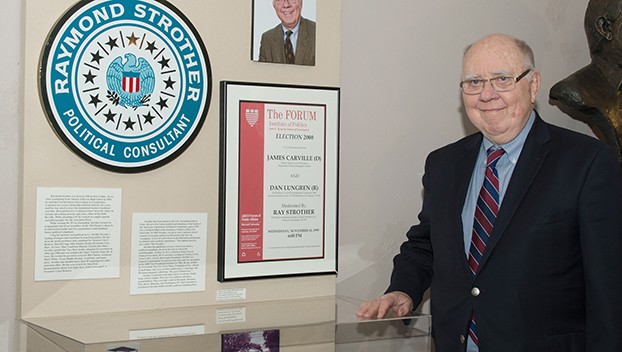 Raymond Strother from 2018 on one of his many visits to the Museum of the Gulf Coast. (Bart Bragg/Special to The News)

To say the 81-year-old Strother led an interesting life would be an understatement. His career highlights are many and include not just campaign manager to Gov. Bill Clinton of Arkansas but also to Louisiana Gov. Buddy Roemer and Tennessee Senator Al Gore’s 1988 presidential bid, among dozens of others.

Strother was born and raised in Port Arthur and graduated from Thomas Jefferson High School in 1958. He then went on to Louisiana to attend Northwestern State College. In 1959 as a sophomore the administration asked him to leave because of his criticism of the John Birch Society, his son Dane Strother said in his obituary.

From there he transferred to Louisiana State University and became editor of the Daily Reveille and worked as a night reporter and photographer for the Associated Press.

“In his 1965 Master’s thesis, he predicted that media would dominate future political campaigns,” according to his biography.

He was obviously correct.

A staunch supporter of civil rights, Strother forged a close friendship with Congressman John Lewis and produced a campaign documentary on him, Dane Strother said.

There’s a lot more to Strother than this. In 2009 after he left Washington for retirement in Bozeman, Montana, Northwestern invited Strother to teach as the Wise Distinguished Communications Professional, a position he held for several years. His students included Jim Mustian, who later won a Pulitzer Prize for reporting at The Times-Picayune/The Advocate.

Strother was awarded an honorary doctorate of humane letters by Northwestern in 2014, and his family has endowed a scholarship for Black students in his name at Northwestern.

Neal said Strother handled elections all over the United States and not just local. He even trained political strategist James Carville, Neal said.

“He was one of the most recognized consultants,” Neal said while noting Strother’s book, Falling Up: How A Redneck Helped Invent Political Consulting (LSU Press).

“Strother holds nothing back,” Publishers Weekly said in a review. “He gives full vent to his anger over prejudice against his Southern background, his disgust with the corruption of Louisiana politics and his ‘Darwinist, ferocious’ approach to his profession. Although Strother’s political prestige would be enough to guarantee his memoir’s importance, his unflinching recollections raise the book to an even higher level of significance.”

Mark McKinnon, who did campaign work for President George H. W. Bush, Senator John McCain, among others, and co-founded No Labels, a nonprofit focused on bipartisanship, civil discourse and political problem-solving, said Strother was a legend in the business — old school in all the best ways.

There’s a whole lot more to Strother than space I have for this column so check out his writings, Google him or better yet, visit the Museum of the Gulf Coast to see the exhibit in his honor.