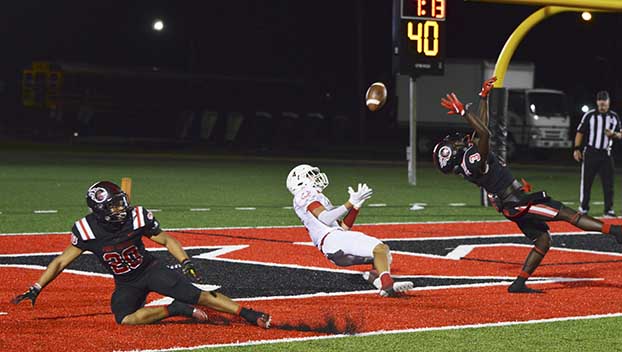 A late interception in the end zone by Memorial safety Daevon Iles sealed the victory for the Titans in a 20-13 win over Crosby Friday.

The safety recorded his sixth pick of the season with just over two minutes left in the game with Crosby threatening to score and potentially send the game to overtime.

Inside the Titans 20, Crosby heaved a high-arching pass to the back of the end zone, where Iles boxed out the receiver to come down with the ball.

“I’m glad he is on our side,” Memorial Head Coach Brian Morgan said of Iles. “He is a great football player. We love having him around. He is a stud.”

Iles has recorded at least one turnover in each game this season.

Turnovers and penalties played a big role in the game being close. The Titans turned the ball over twice in the red zone in the first half and had to settle for three points after being on the 2-yard line in the third quarter.

Morgan said his team will have to clean up some areas if the Titans want to reach their goals of a deep playoff run. Heading into halftime, the Titans were on their way to take the lead and gain some much-needed momentum. Titans quarterback Davion Iles threw the ball into traffic, leading to a Crosby pick. The Titans and Cougars went into halftime tied at 10-10. Memorial’s first score came by way of a field goal and the first touchdown came courtesy of a short run by Ja’coryn Baker.

“I don’t think we were really ever stopped all night,” he said. “The pick in the first half really hurt us and Davion knew that. If we settle for a field goal, it is a whole different deal. We had the fumble, too. We did not take care of the ball well tonight and we have to take care of the ball.

Late in the third quarter, the Memorial defense held strong and forced Crosby to punt with the score at 13-10 in Memorial’s favor. The Titans’ offense was able to heat up when Wilson found Baker for a big pass and catch off a scramble. The play ended with a Baker fumble deep in Crosby territory, but a lucky bounce ended with Memorial retaining possession. A few plays later, Baker made up for his mistake, punching it into the end zone from two yards out to give the Titans a 20-10 lead with 1:13 left in the third quarter.

On the next drive, the Memorial defense recovered after a screen pass put the Cougars in the red zone. Crosby took a shot at the end zone but the ball fell harmlessly to the turf after Memorial defensive back Nolan White tipped it. Crosby was forced to settle for a field goal to make the score 20-13.

The play of the game was… Iles’ game-sealing interception late in the fourth quarter in the back of the end zone.

The game ball goes to… The Memorial defense was able to hold tough and consistently come up with big plays to keep the Titans ahead.

Up next… The Titans will be on the road as they travel to LaPorte. Kickoff is set for 7 p.m. Friday.