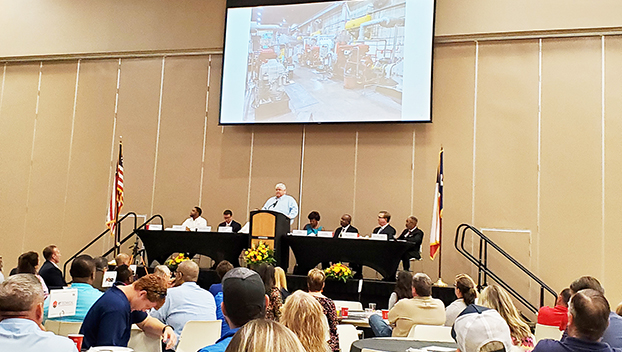 Jefferson County Drainage District 7, whose levees and pump stations provide safety to the area, is embarking on a number of projects to better serve Port Arthur, Mid County and surrounding communities.

Allen Sims, assistant manager/district engineer, said one of the largest planned projects is an upgrade to Shreveport Pump Station, which will serve the major area of downtown Port Arthur around Lamar State College Port Arthur, City Hall area the proposed development area the city is looking at.

But the biggest project on the drawing board is the Sabine Pass to Galveston Coastal Risk Management Project. This, Sims said, is a joint project between DD7 and the U.S. Army Corps of Engineers. 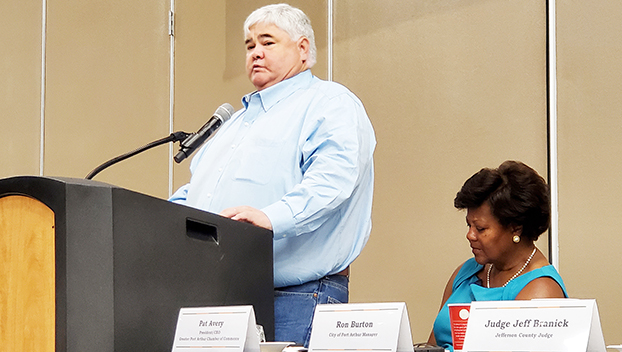 “The levee system that was constructed in the ‘70s was built to handle a hundred-year storm at the time,” Sims said. “Since then we’ve learned a lot of lessons, such as Katrina. The possible eight miles of sheet pile wall we have within the system is now considered unacceptable design. So, the Corps has entered into a project with us, a project partnership agreement, and the plan is to raise the entire levee to an elevation to prevent storm surge associated with the 100-year storm, 50 years in the future.”

This, he said, accounts for a sea level rise that means the raising of approximately 20 miles of levee and replacing all eight miles of sheet pile wall.

To do so, the sheet pile will be pulled and replaced with a concrete inverted T wall. For the most part, the earthen levees will be topped off to increased height.

In other areas they will be creating small inverted T wall on top of areas that do not have enough footprint to raise an earthen levee.

The current estimated cost is $863 million to be paid at 65 percent federal money and 35 percent local money.

“In reality, I think our estimate is about to come out at the end of October. It’s going to be around $1.2 billion and by the time we get to the end, it wouldn’t surprise me if it was $1.4 billion… 35 percent’s a lot,” Sims said.

The local cost first came in at $302 million, but as time goes by, the cost could be more like $450 million, he said.

Consultants were hired to work with legislators to help with the funding. Several appropriations of funding were made in 2019 and 2021, with another push coming in 2023.

Sims, who was one of the guest speakers at the Greater Port Arthur Chamber of Commerce Leadership Breakfast this week, said there are other projects going on.

One is to upgrade a system to operate electric pumps remotely. This reduces manpower but allows workers to get the pumps on a few minutes earlier, he said.

Mitigation action projects are ongoing, including the addition of detention ponds scattered throughout the district that are funded by the Hazard Mitigation Grant Program. Four are in the works at a cost of approximately $25 million.

“What we’re finding is we’re increasing the efficiency as far as fuel consumption, but in addition to that, we are able to run these pumps in what we call the sweet spot, the best place for the torque and the RPMs that we’re actually increasing our pumping capacity to about 15 to 20 percent on each one of these,” Sims said.

Four to five engines are being replaced every six months until all are done. And with 20 pump stations, that means there are 84 to be replaced.