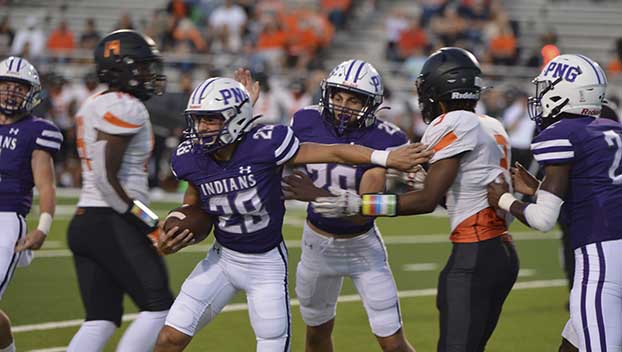 “I’m just proud of our resilience. We put ourselves in some positions we shouldn’t have been in with some silly stuff down the stretch, but we fought hard and that’s what really counts,” said PNG coach Jeff Joseph. “We needed to win a game like that, a close one where we had to fight, and we did.”

Nguyen led the ground attack with 124 yards on 29 carries. Blair Chatagnier added 38 yards on seven carries. Prosperie had 121 yards receiving on five catches. He hauled in touchdown passes of 30 and 46 yards. Cole Crippen completed 11 of 23 passes for 191 yards and two touchdowns.

“Offense got off to a slow start and we had to clean up some things in our pass protection so Cole (Crippen) could get into a rhythm,” said Joseph. “We are going to have to have some balance going forward.”

Trailing 21-14, Texas City (3-2, 1-1) tallied the first score of the second half on their second possession. After forcing a PNG punt, Maurice Burton scored on a 45-yard touchdown run as the Stingarees tied the game at 21-21 with 7:16 left in the third quarter. 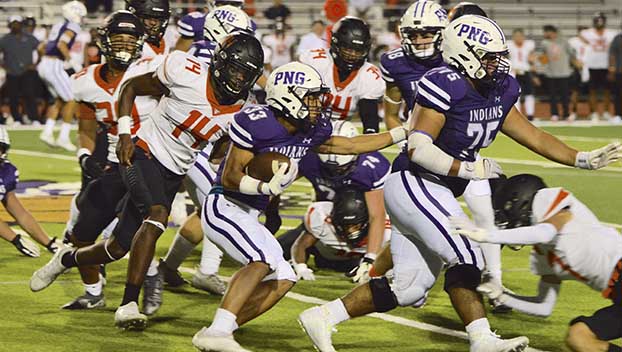 PNG (3-2, 1-1) answered with a 14-play scoring drive, which featured a good mix of run and pass. The Indians were able to convert two key third down plays. Shea Adams capped the drive with a 6-yard TD run that put the Indians back on top, 28-21, with 40 seconds left in the third quarter.

The Indians appeared to put the game out of reach late in the fourth quarter. Trying to run out the clock, Crippen hit Prosperie on a 46-yard scoring strike on second-and-1 to put PNG up 35-21 with just 2:59 left in the game.

The Indians were able to run out most of the clock with Nguyen. PNG was forced to punt the ball back to the Stingarees with just 10 seconds left. Texas City’s final pass attempt was intercepted by Dylan Lawless as time expired.

“We turned them over and found a way to score,” said Joseph of his defense. “We had two of our starting linebackers out tonight and we had some young dudes really step up and play their butts off. They did a really good job.”

The game couldn’t have got off to a sloppier start by both teams. PNG received the opening kickoff and had a good drive going. Crippen hit Landon Guarnere for a 15-yard completion and Nguyen had runs of 5 and 9 yards. Crippen was then intercepted by Diego Battles to give Texas City the ball at its own 35.

The Stingarees drive only lasted three plays as quarterback Joey Duran was intercepted by Reid Richard, giving PNG the ball at its own 25.

Neither team was able to get any offense going their next possessions. Texas City finally put the first points on the board on their third possession. Caleb Bell raced 78 yards for a touchdown to give the Stingarees the lead at 7-0 with 3:14 left in the first quarter.

Again, PNG was putting together a nice drive. Nguyen had four straight carries that covered 43 yards, the longest of which was for 26. However, Crippen was intercepted by Aldrick Stromile inside the Texas City 5 yard line.

The Indians finally got on the scoreboard midway through the second quarter, and it was the defense that posted the tally. Kameron Droddy intercepted Duran and returned it 22-yards for a touchdown to tie the game at 7-7 with 7:15 left in the quarter.

Texas City responded right back with its second two-play scoring drive. This time it was Clyde Burton on an end around that raced 56 yards, breaking several tackles along the way, for a touchdown to put the Stingarees back on top at 14-7 with 6:50 left in the second quarter.

After the PNG defense forced a fumble, its third takeaway of the half, the Indians turned the short field into a scoring drive. Crippen hit Chance Prosperie for 28 yards to the Texas City 5 on fourth-and-10. Shea Adams scored two plays later on a 2-yard TD run to tie the game at 14-14 with 3:24 left in the second quarter.

The Indians defense came up big again. Following a 20-yard punt, PNG had good field position at the Stingarees 30. Crippen hit Prosperie on a 30-yard scoring strike to give the Indians their first lead of the game at 21-14. That’s how the two teams went into the locker room at halftime.

The play of the game was… Kameron Droddy’s 22-yard interception return for a touchdown. PNG’s offense had sputtered with a pair of turnovers. Droddy’s touchdown provided a spark that got the Indians going.

The game ball goes to… Senior wide receiver Chance Prosperie, who caught five passes for 121 yards and two touchdowns. He hauled in TD passes of 30 and 46 yards.

Up next… Port Neches-Groves hits the road next Saturday, Oct. 8, for a 1 p.m. game at Fort Bend Willowridge. Texas City returns home to host state-ranked Fort Bend Marshall for a 7 p.m. game next Friday.