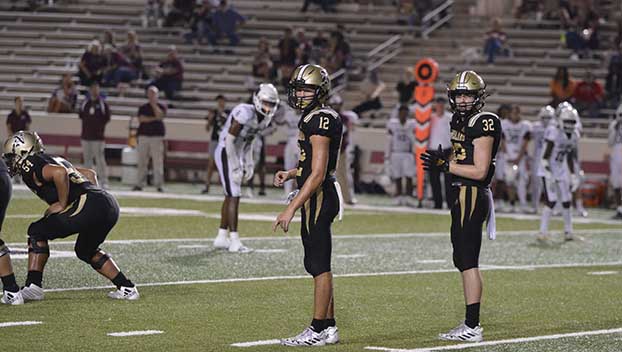 NEDERLAND — The Nederland Bulldogs won their first game last week. A big reason why was the performance of Bulldogs utility player Ayden Sunday.

He is now Nederland’s starting quarterback. Sunday took over the position after halftime of the Bulldogs’ loss to Silsbee and almost led the team to a huge fourth-quarter comeback.

Since moving to the position, Nederland has outscored opponents 54-14.

Sunday started the season as a receiver and running back and also plays safety on defense.

“Anytime you can put someone at different areas, it increases your depth, obviously,” Nederland Head Coach Monte Barrow said. “It also gives you a guy that is a good athlete and can do a lot of things. I think playing those position helps him with the others.” 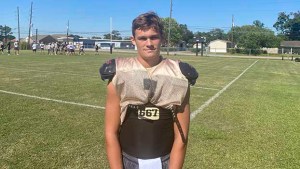 In last week’s win over Fort Bend Willowridge, Sunday finished with eight carries for 50 yards and a rushing touchdown. He also completed 7 of 11 passes for 133 yards and two touchdown passes.

“Some things change with him being a runner, as well,” Barrow said. “By formations, teams have to do certain things to account for his ability to run.”

Barrow and Sunday said quarterback Adam Trosclair has been instrumental in the smooth transition.

“He has handled it like a champ,” Barrow said of Trosclair. “The way those two have handled it has made the team better. Adam still comes and works his butt off every day.”

Sunday said his relationship with Trosclair enables them to capitalize on the field.

“He lets me know of things he sees that I might not see,” Sunday said.

Sunday said he is proud of his speed and how it helps him at quarterback, but added he is still only as good as the guys blocking.

“It feels good (playing quarterback),” he said. “I have all the trust in my receivers and I just try to let them make a play on the ball.”

Off the field, Barrow said Sunday is as good as a student-athlete gets.

“He is the type of kid you want your young kids to look up to,” Barrow said.

The cool weather that hit the area this week brings relief to many players on the gridiron, but for Sunday, it brings anticipation. That brisk feeling means deer hunting season is around the corner. He is looking to top last year, when he bagged a 12-point buck, which remains his biggest one.

Until then, Sunday and the Nederland offense has to settle for hunting a playoff spot.

Nederland returns to the field Friday for its homecoming against Dayton. Kickoff is set for 7 p.m. at Bulldog Stadium.

Those not able to make the game can watch live on the Sheffield Productions YouTube channel for no cost.