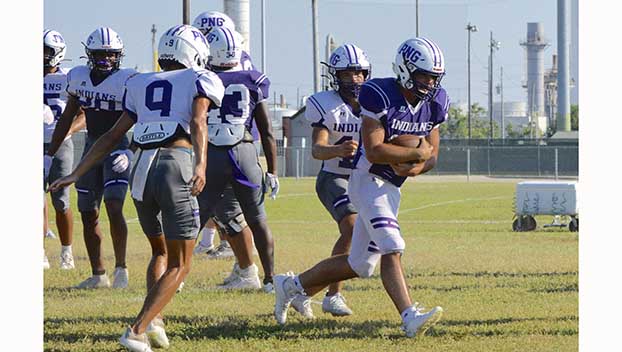 The Port Neches-Groves football team might face its toughest test of the regular season in the first district game against Fort Bend Marshall Saturday.

Kickoff is slated for noon at Mercer Stadium.

Preseason predictions had the teams finishing first and second in the district, meaning Saturday’s game could play a major role in determining which team gets the No. 1 seed come playoff time.

The recent matchups between the two teams have not favored PNG, which has lost the last three contests dating back to 2018. All three losses were in the playoffs, with the most recent being a close contest that ended with a 21-14 victory for the Buffalos in 2020.

The two teams entered the same district this past spring after the UIL changed the zones.

PNG enters district play with the No. 2 offense in the district, averaging 417 yards per game. The Purple and White have the third-ranked rushing attack (246.3 ypg) and third-rank passing game with 171 ypg.

Running back Tommy Reed is second in the district with 368 yards rushing but leads the district in carries with 62 through three games.

Buffalo quarterback Jordon Davis leads the district with 702 yards passing and his go-to target is Ja’Koby Banks, who is second in the district with 14 catches, but leads in yards with 277 (20 yards per catch).

“Their speed stands out,” Joseph said of the film study on Marshall. “They are really fast. They are the defending state champions in track. They have a lot of guys that are fast. They have really good skill players. They are big up front and they are a well-coached team. It is going to be a challenge.”

A noon game Saturday also means warmer conditions as both teams are used to typically playing at sunset. Forecasts show a high of 95 degrees for Saturday.

“We had our open week and we tried to get ourselves in shape to play full football games,” Joseph said. “Whether they are in the heat or not is something we can’t control. They are playing in the same heat we are. Conditioning will be a factor. It is going to be hot there on Saturday. Hopefully, we are in shape to play. We will find out.”