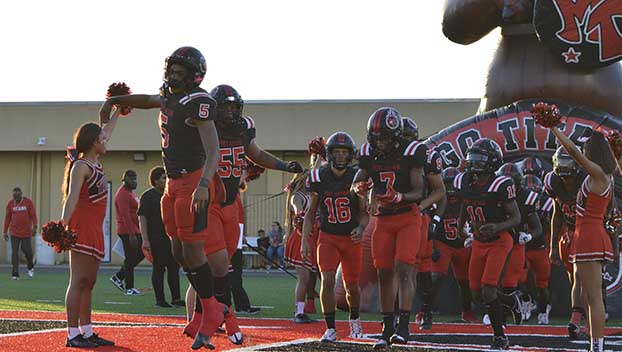 BAYTOWN – Memorial was back to looking like a state-ranked team as senior quarterback Davion Wilson turned in another stellar outing.

The Titans overwhelmed Baytown Sterling 47-7 Thursday night in District 8-5A Division I action at Stallworth Stadium.

Wilson completed 17 of 21 passes for 224 yards and three touchdowns. He also ran for 54 yards on eight carries and one touchdown. Caleb Goodie was his top target, catching five passes for 105 yards and 1 TD.

“The last couple of weeks, I think Davion (Wilson) was trying to do too much running the ball,” said Morgan of getting the passing game going more. “He’s a really good thrower and we have good players. We have a bunch of really good skill players. Spreading the ball around early is going to help open up the running game later.”

Leading 20-0, Memorial opened the second half like it closed the first, with a scoring drive. Wilson rushed twice for 12 and 5 yards, respectively. Then Wilson hit Goodie on a 33-yard scoring strike to extend the Titans lead to 27-0 with 10:20 remaining in the third quarter.

On the Sterling’s first snap of the second half, Jacori Smith-Jackson intercepted John Smith and returned it 57-yards for a touchdown. That put the Titans up 34-0 with 9:56 left in the third quarter.

After forcing a three-and-out, Memorial’s offense put together another scoring drive. Wilson hit Ja’Quan Holmes for a 16-yard completion. Wilson and Goodie connected again for a 50-yard completion to the Sterling 4. Wilson hit Quinton Harper in the left corner of the end zone for a 4-yard TD to give the Titans a 41-0 lead with 5:08 left in the third quarter.

Sterling (1-4, 0-3) finally got on the scoreboard midway through the fourth quarter. Forced to punt deep in their own territory, a low snap led to a blocked punt that was recovered by the Rangers’ Gerrell Reed in the end zone for a touchdown that cut the Memorial lead to 41-7 with 8:09 left in the fourth quarter.

The Titans closed out the scoring in the final minute of the game. Playing mostly reserves in the final quarter, Joshua Neal scored on a 14-yard TD run with :12 left in the game to make the final score 47-7.

Memorial got the scoring started on their first possession, which was set up by an interception from Daevon Iles. Taking over at the Rangers 38, the Titans needed just four plays to tally the game’s first score.

Wilson hit Harper for 22 yards on the first play from scrimmage. Ja’coryn Baker followed with a 4 yard run. Following an incompletion, Baker scored on a 12-yard touchdown run to give the Titans a quick 7-0 lead with 7:14 left in the first quarter.

Sterling was forced to punt in its next possession. A high snap led to a loss of 17 yards, giving Memorial the ball at the Ranger 19. However, the Titans were not able to take advantage of the good field position. Wilson hit Najiya Green for 12 yards to the 10. Wilson followed with a 9-yard completion to Caleb Goodie to give the Titans first-and-goal at the 1.

Wilson was tackled for a 4-yard loss on first down. Following an incompletion, Wilson carried for 3 yards to the 2. Going for it on fourth down, Baker was stopped short of the goal line and the Titans turned the ball over on downs.

After the Titans defense forced a quick three-and-out, Memorial’s offense went back to work. Wilson hit Harper for 14 yards to the 18. Wilson fired an 18-yard scoring strike to Green. The extra point was no good to give the Titans a 13-0 lead with 9:33 left in the second quarter.

Memorial closed out the first half scoring with a late drive. The 11-play drive culminated with a 4-yard touchdown pass from Wilson to Harper in the left corner of the end zone with just 28 seconds left in the second quarter. The Titans went into the locker room with a 20-0 halftime lead.

The play of the game was… Daevon Iles intercepted Sterling’s John Smith on the Rangers opening possession and Memorial scored four-plays later to give the Titans a quick 7-0 lead. A lead they would not relinquish.

The game ball goes too… Senior quarterback Davion Wilson completed 17 of 21 passes for 224 yards and three touchdowns. He also rushed for 53 yards on eight carries and 1 TD.

Up next…
Memorial returns home to host Crosby next Friday. Kickoff is slated for 7 p.m. Baytown Sterling hits the road next Friday for a 7 p.m. game at Porter.