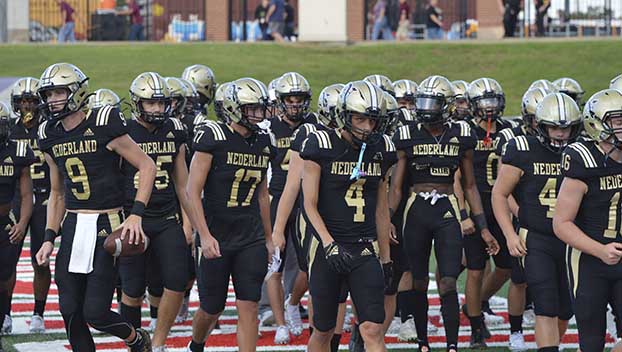 The Nederland Bulldogs earned their first win of the season with a 38-14 decision over Fort Bend Willowridge in Sugarland in Thursday evening action.

The Bulldogs (1-3, 1-0 in district play) started the game off with a huge return that put Nederland across the 50. However, the drive stalled after quarterback Ayden Sunday fell after jumping for a high snap on third down. After a 39-yard field goal by Carter Piletere, Nederland led 3-0.

The Bulldogs defense shut down Willowridge (0-4, 0-1), who ran for a first down on their first play but was forced to punt four plays later.

After a 7-play drive, running back Hubert Thomas punched it in from 5-yards out to give the Bulldogs a 10-0 lead.

Fort Bend answered with a 56-yard return to put them in Nederland territory. Six plays later, the Eagles connected on short touchdown pass to bring them within 3.

A Nederland fumble on the ensuing drive set up a 15-yard touchdown pass by the Eagles to take their first and only lead of the night at 14-10 with 8:42 left in the second quarter.

That was the last time For Bend scored, but Nederland was far from finished.

On the next drive, Sunday found Reeve Barrow for a 35-yard strike to put the Bulldogs on the Fort Bend 14. Two plays later, Sunday ran it in from 11-yards out to give Nederland a 17-14 lead with 5:23 left in the first half.

The Bulldogs recovered a pooch kick and started the drive on the Fort Bend 35. Four consecutive runs were capped off by Thomas, who ran it in for 6 yards and a score.

Even with less than three minutes left in the first half, Nederland was not finished scoring. While Willowridge was trying to put some points on the board before half, Nederland linebacker Landen Caywood picked off a pass and returned it to the Fort Bend 31. Three plays laster, Sunday found Barrow again for a 29-yard TD to give the Bulldogs a 31-14 lead, which is how the score remained going into halftime.

In the second half, Sunday connected with Jake Harvard on a 26-yard touchdown pass in the third quarter to bring the score to 38-14.

The Bulldogs were able to bring in the second string for the fourth quarter to help run out the clock.

The game ball goes to… Hubert Thomas had some tough runs to keep the Nederland offense going. He finished the game with 15 carries for 93 yards and two touchdowns.

The play of the game was… Just after reclaiming the lead, the Bulldogs opted to go for a pooch kick. The kick was recovered by Isiah Hernandez, who had missed the last few weeks due to a concussion he suffered against West Orange-Stark.

Key stats… Sunday finished the game 7 for 11 for 133 yards, one interception and two touchdowns. He also added eight carries for 50 yards and a touchdown.

Next up… Nederland will host Dayton for homecoming Sept. 30.