Bulldogs, Eagles looking for first win in what promises to be intense game 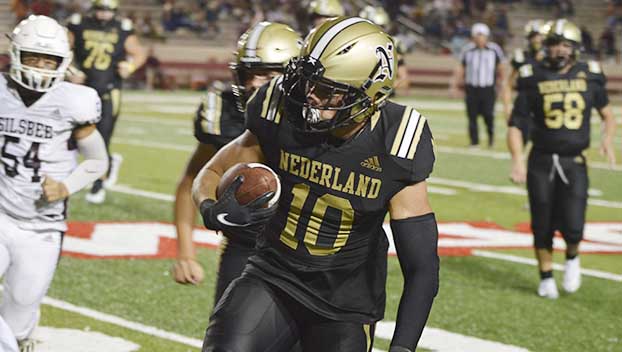 NEDERLAND — The Nederland Bulldogs hope to be the one earning their first win Thursday as they travel to Fort Bend to take on winless Willowridge.

The game kicks off at 7 p.m. at Hall Stadium. Those not able to make the road trip can follow the action on the Sheffield Productions YouTube page for no cost.

Nederland is hoping to build off some momentum the team built in the fourth quarter against Silsbee two weeks ago. The Bulldogs scored 16 points in three minutes to bring Nederland within 8 points, but were unable to get the stop on defense to get the ball back for a chance to tie.

Nederland Head Coach Monte Barrow made a quarterback change to Ayden Sunday in the second half of the Silsbee game, but said he had not made a final decision on who will line up behind center for Thursday’s contest.

“(Sunday and Adam Trosclair) have been competing,” Barrow said. “They will have an opportunity to do that through this week up to Thursday. They have both been helpful and supportive of each other. They have shown great maturity in that part, and I am proud of them for that.”

Barrow said there has been a different feeling around the team this week as the first district game nears.

“It is what counts,” Barrow said. “It is part of achieving your goals and making the playoffs. There is a different feeling at practice this week. Everything starts over. We are looking forward to the district race.”

The coach said the team shouldn’t feel the impact too much of a shortened game week, as the team comes off the bye week well rested.

“It is a little different,” he said. “It will be here before we know it. Hopefully, our focus starts quicker on that game. It is our first really long road trip. It is one of a few we will have, but it is part of the game.”

This year is the first time Fort Bend Marshall and Willowridge have been in the same district as the Bulldogs. The two school districts are 113 miles apart (nearly two-hour drive). Nederland lost former district opponents Barbers Hill and Crosby, who were closer, but the two teams moved up to Division I, which left no opponents within an hour and a half drive for Nederland and Port Neches-Groves to play.

“They are the best looking team I have seen on video as far as them just standing,” he said. “They have a really, really athletic group. They do things on video that show that athleticism. I think the coach’s kid is the quarterback, so he knows what to do.”

The two teams are almost identical on paper. Both Nederland and Willowridge have allowed an average of 32.7 points per game this season. The Eagles offense has only garnered 13.7 points per game, while Nederland averages 12.3 points. Barrow said his team will have to keep the game in their hands.

“We can’t get behind the chains and give away downs,” he said. “On defense, we have to keep playing like we have up front. We have to prevent the big play. We have to get them down and make them snap it again. You always have a chance when that happens. We have to get that feeling of winning. That will be big for us.”