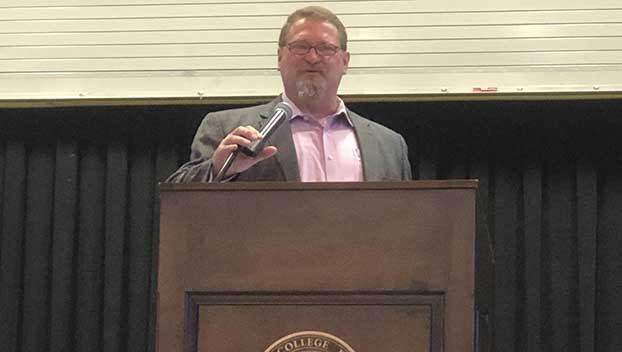 Ben Stafford, vice president for Workforce and Continuing Education at Lamar State College Port Arthur, spoke to the Contractor’s Businesses Development group with an immense amount of numbers and data.

But the message was simple.

Stafford was the guest speaker at the event sponsored by the Greater Port Arthur Chamber of Commerce and held on the second Wednesday of each month at the Carl A. Park Multipurpose Center.

The LSCPA official gave provided history and updates regarding the college’s past, present and future.

“This campus was founded in 1909,” he said. “We’re one of the 10 oldest two-year colleges in the state. On our original campus there was a dormitory for men and for women — a decade before women had the right to vote in the United States of America. It was equal opportunity education at a tiny little college on the edge of the Texas/Louisiana border.”

The building was demolished in the 1960s, however student housing was added to the campus in 2016. 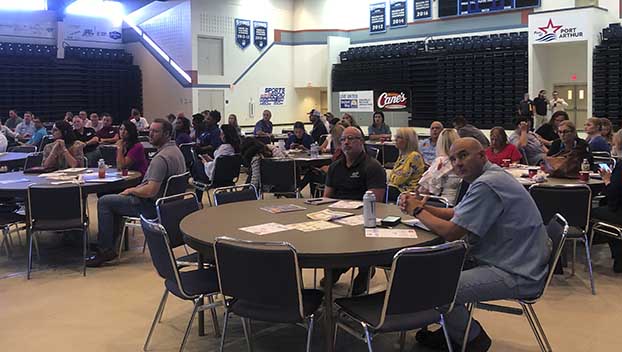 The Contractor’s Business Development Group meets on the second Wednesday of each month at the Carl A. Park Multipurpose Center on the LSCPA campus. (Monique Batson/The News)

One year later, the facility built in 1906 that served as the first high school in Port Arthur was transformed into Woodrow Wilson Early College High School.

“Students in high school are taking college classes and graduating with a diploma and a two-year degree,” Stafford said.

Next to it is a Motiva hands-on training unit, which Stafford said is one of only three units that advanced in the state.

“COVID years really hurt the college,” he said. “We had to move very quickly from in-person training to online training, but it never stopped us. Throughout the COVID years, we expanded many different projects on the campus.”

However, COVID did bring opportunities to the college not offered elsewhere.

The commercial driver’s license program, which partners with the Department of Public Safety to provide students with their exam and CDL, served hundreds.

“During COVID we were the only open examination center within 500 miles,” he said. “We had drivers from all over Texas coming into Port Arthur to earn their commercial drivers license. The governor asked Texas colleges to step up and support transportation, so we kept this program open all through COVID.”

Currently, using land donated by Jefferson County near the correctional facility, LSCPA is constructing what will be the largest commercial driving center in the state.

And next month, LSCPA anticipates scheduling an open house for the new Industrial Craft Training Facility, which was grant-funded in 2019 and began construction later that year.

“This will be an interesting facility for any of you who do contracting, industrial contracting and craft contracting,” Stafford told the crowd. “This is a very large building where you can teach a person to weld and as soon as you finish that you can say, ‘that’s nice, that’s really good; now step into this rig and let me pull you 30 feet up into the air so you can weld it like you were welding it at a refinery. Because if you don’t know how to weld at 30 feet, you don’t need to look up there for a job. You need to look for a job at a warehouse.”

Travis Woods, chairperson of the group, called LSCPA’s growth “thinking outside the box.”