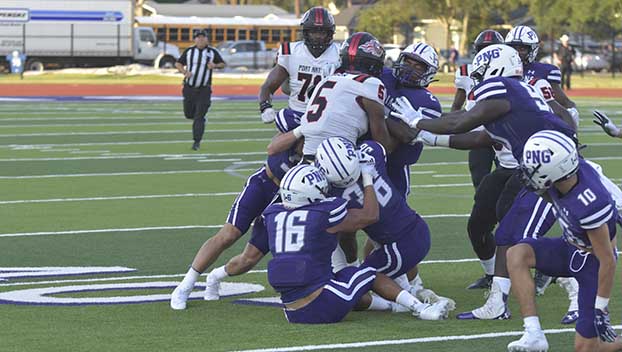 The Port Neches-Groves football team has put together a pair of strong performances after dropping the season opener to Memorial.

PNG bounced back against Beaumont United and West Orange-Stark prior to the bye week.

Despite giving up 50 points and more than 400 yards of offense to the Titans, PNG’s defense ranks third in the district in defense. The Purple and White held BU to 81 yards of total offense and held an explosive West Orange-Stark squad to 208 yards.

“The kids are really buying into what we are doing, and they are working hard,” defensive coordinator Matt McDaniel said. “They came out the first week, and I think they were a little timid. They have gotten a lot more into the attack-mentality, and that has really helped us. It really all goes back to the way they practice.”

McDaniel said the unit gains more confidence each week, which has led to increasingly better results.

“Confidence plays a big role,” he said. “That was the biggest thing going from Week 1 to Week 2. We played a lot better and had some success in practice. They built on that up to the West Orange game. They played well and aggressive.”

The improvement does not mean the PNG defense is a finished product, though. The defensive coordinator said there are still plenty of areas that need to improve if PNG is going to make a run at the district title.

“They know we have to improve,” he said. “We have a long way to go in some of our run fits and tackling. We have some things that we didn’t do as well as we would like in the first few games.”

“Our line has been really good, too,” McDaniel said. “Peyton Broom and Isaac Baker have played really well. It has been a good effort all around.”

Baker, who plays defensive end and is one of the team’s captains, said PNG’s intensity has changed.

“Our effort in practice has been way better,” he said. “All of the hard work has paid off. We got our butts handed to us by Port Arthur. It made us work harder and realize who we really were.”

The defensive end said the team was excited to shut down the past two opponents.

“West Orange is pretty fast, and they are ranked in the state,” Baker said. “We feel pretty good. We just want to win district. Right now, we just want to beat Fort Bend (Marshall).”

PNG returns to action Sept. 24 with a road game at Fort Bend Marshall.