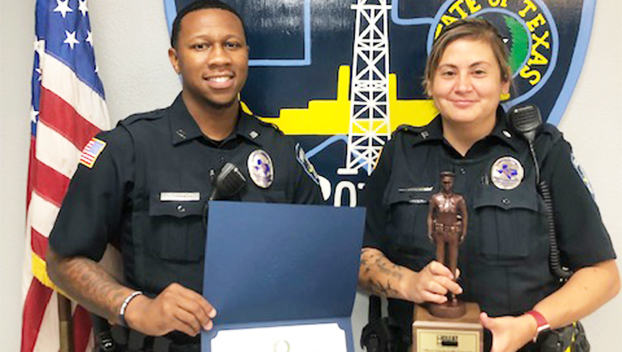 Sometimes hearing a baby scream and start to cry is the most welcoming sound one can imagine.

According to the Port Arthur Police Department, that was the case recently for a group of first responders.

The actions in this case, made public this week by the department, earned one local officer Combined Law Enforcement Associations of Texas Officer of the Year status.

On the afternoon of March 5, police said officers Gloria Gonzalez and Bao Tran responded to 5149 6th Street in reference to an unknown 9-1-1 call.

A female caller had been screaming frantically, asking for help, but no further information could be obtained.

Gonzalez and Tran ran into the home and found a 6-month-old baby unresponsive and turning blue in the face.

According to PAPD, Gonzalez “immediately” grabbed the child, turned her over and began administering back thrusts in an effort to dislodge anything the baby might be choking on.

Gonzalez’s actions caused the baby to spit up food and mucus, police said, and most likely saved the child’s life.

Tran called for EMS and assisted Gonzalez in the life-saving efforts.

Moments later the officers heard the baby cry and saw color return to her face.

It was surely a welcoming noise for the police officers working to breath life back into the vulnerable baby.

The Port Arthur Fire Department and Acadian EMS arrived and took over care of the child. Oxygen was administered, and the baby was taken to a local hospital.

The child made a full recovery, police said, while also noting Gonzalez is a 5-year PAPD veteran officer.

“We believe the quick and calm actions of Officer Gloria Gonzalez — who is a mother herself — saved the life of this 6-month-old baby girl,” a PAPD statement read. “We are very proud of Officer Gonzalez and this well-deserved honor she has received. She was also nominated for the Life Saving Medal presented by the Port Arthur Police Department at their annual awards program.”

For her life-saving actions and general contribution to local law enforcement, Gonzalez is the 2022 CLEAT Officer of the Year award winner. She also received a Certificate of Recognition from the House of Representatives presented by Mary Ann Perez.