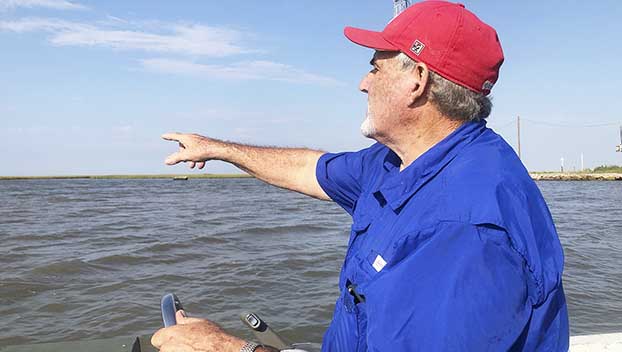 I have always been a strong proponent of local news. But it was last week while taking a two-hour tour of the Sabine-Neches Waterway and the Gulf of Mexico with a kind Port Arthur native named Skip that I began to understand the difference between local news and community news.

Considering the number of high-water rain events we have experienced since Hurricane Rita in 2005, you’d be hard pressed to find a Southeast Texas journalist that hasn’t gotten in a boat with a stranger.

To be honest, we’re pretty notorious for doing everything we were taught not to do in grade school.

If there’s a shooting, we’ll be knocking on doors around the location with no knowledge of what we could come across. When TPC exploded and everyone was asked to leave the area, we headed straight for it.

I’ve known at least four journalists who have accidentally drowned their own vehicles trying to cover tropical storms. And when we get messages from a city or county entity telling everyone to avoid a particular area because of a hazard, we’ll be in our vehicles headed that way within two minutes.

Skip first reached out to me in email, saying he followed my articles regarding dune restoration at McFaddin Beach and the dredging project, and wanted me to show the danger to our wetlands from the water in, as well as the deterioration of the jetty (a topic I’ll be writing about soon).

But having grown up here all my life, it was incredibly educational to see my home from a different point of view.

And on top of that, it was inspirational. Skip not only knew the history of Sabine Pass and its importance to the area, he was familiar with my writing. He referenced several articles and even remembered I had once spoke about my Cajun heritage.

Yesterday made 1.5 years since I joined The Port Arthur News, going from a past that covered a very large area to a present that focuses only on what’s directly around us.

At larger metro papers, it’s easy to become a name sometimes seen on a page. But when you’re focused on only what’s close to you, the opportunities become so much larger than a legacy publication.

Of course it’s important to discuss the large topics that occasionally root in Southeast Texas. But it means something to be able to tell people what they’re building on Jimmy Johnson Boulevard, what’s been omitted from your city’s next budget, how the curriculum has changed at your child’s school, the importance of voting in a municipal election and how two children used a lemonade stand to pay for a family vacation.

Still, I’ve learned even more than that.

I’ve been able to form relationships with so many local leaders, volunteer with civic organizations, serve on a number of boards and committees and truly become part of my community.

And I thank each and every one of you for being as welcoming of me as you have. I look forward to continue working with and getting to know each of you.