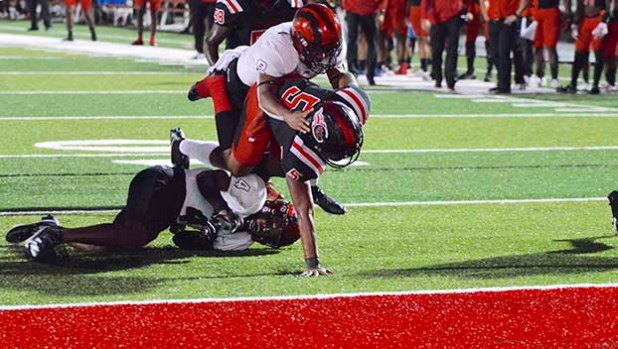 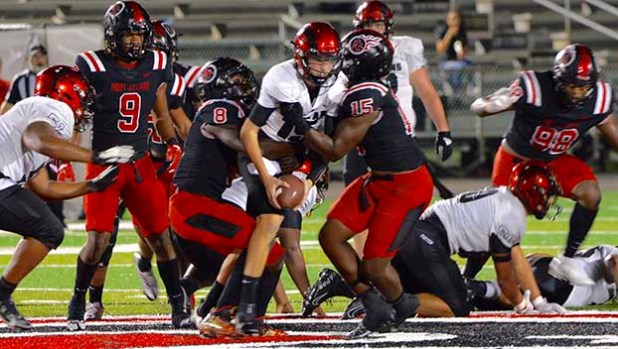 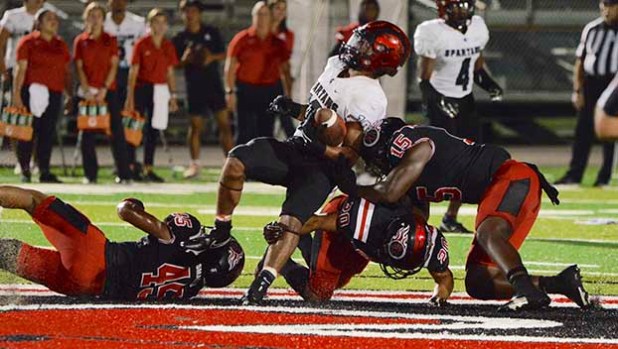 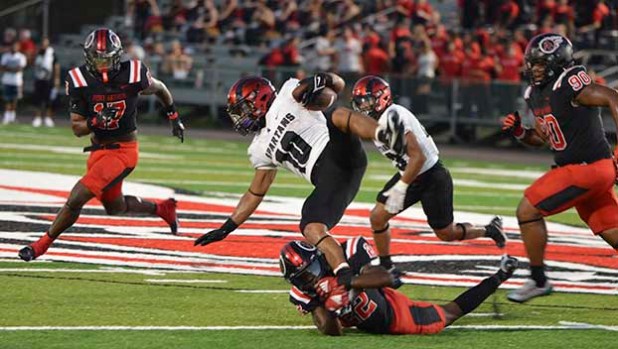 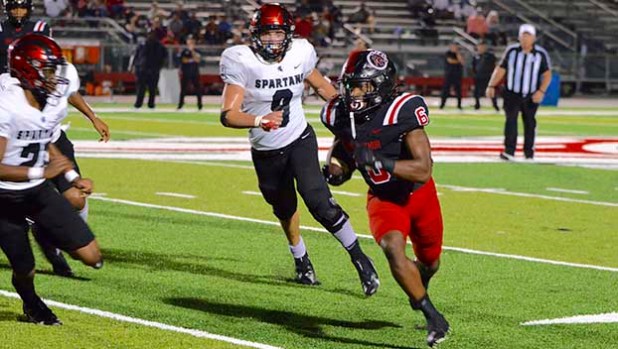 In a game that was much closer than Memorial would have liked, the Titans narrowly escaped with an 18-17 win over Porter in the District 8-5A Division I opener Friday at Memorial Stadium.

The game came down to the final seconds and capped a wild final minute of the contest.

Porter’s Alex Hernandez lined up for a game-winning 32-yard field goal with 1.7 seconds left in the game, but his attempt was wide left to preserve the win for the Titans.

“We got the result we wanted,” said Memorial head coach Brian Morgan. “We talked at halftime that we’re going to have to fight through adversity. We had to tonight. The guys didn’t shut it down. They kept fighting, which was good to see.

After forcing the Titans into a three-and-out, the Spartans took possession at their own 33 with 6:54 left in the game and down by 1. Porter methodically drove the ball down the field. Joshua Evans-Pickens’ 12-yard run gave the Spartans first-and-goal at the Titans 7 with just over a minute left in regulation.

Gilliam hit Trey Robinson for a 22-yard completion. The ball was tipped in the air and could have been intercepted, but instead fell into Robinson’s arms. Evans-Pickens rushed for 12 yards to the Memorial 15 with 1.7 seconds left to set up the field goal attempt.

The field goal was missed, giving the Titans the victory.

Senior quarterback Davion Wilson led the offense for the Titans. He rushed for 86 yards on 13 carries and scored a TD. He also completed 8 of 13 passes for 140 yards and one touchdown. Caleb Goodie caught three passes for 101 yards and one TD.

Memorial (3-0, 1-0) opened the third quarter with a 17-14 lead. The Titans received the second half kickoff and had a good drive going to the Spartans 35, but that’s were the drive stalled and Memorial turned the ball over on downs.

Porter put together a sustained drive on its first possession of the second half. A lot of the damage was done on the ground. But Gilliam hit Mike Williams for a 34-yard completion to the Titans 12. Memorial’s defense stiffened and held Porter to a 24-yard field goal by Hernandez, which gave the Spartans a 17-15 lead with 3:59 left in the third quarter.

Memorial answered right back with a scoring drive of its own. Wilson had a 45-yard run to the Porter 37. Jelani Chevalier had runs of 12 and 11 yards to the Porter 14. The Titans would have to settle for a 32-yard field goal by Luis Blanco to give Memorial the lead at 18-17 with 11:55 left in the fourth quarter.

Porter (1-3, 0-2) started the scoring on its second possession of the game. The Spartans were the benefit of great field position. The Titans were forced to punt on their first possession. A low snap led to a hurried punt, which just went four yards to give Porter the ball at the Memorial 24.

Joshua Evan-Pickens was featured prominently on the short scoring drive. He carried the ball four times, the last of which was a 1-yard TD run in which he lined up as the quarterback in a Wildcat formation. That put the Spartans up 7-0 with 4:49 left in the first quarter.

Memorial answered right back on its next possession. Ja’Coryn Baker carried the ball for four yards, and a personal foul penalty on the Titans after the play pushed the ball back to their own 14.

Caleb Goodie turned a short pass into an 86-yard touchdown, breaking several tackles in the open field en route to the end zone. A bad snap led to the Titans running the ball into the end zone for a two-point conversion to give the Titans an 8-7 lead with 4:18 remaining in the first quarter.

The Titans added to their lead early in the second quarter after the defense stopped the Spartans on downs at the Memorial 40. Wilson hit JaQuan Holmes for completions of 10 and 12 yards. Quentin Harper caught a 16 yard pass to give the Titans a first down at the Porter 11.

Wilson rushed for four yards and capped the drive with a 7-yard TD run as Memorial extended its lead to 15-7 with 6:50 left in the second quarter.

Porter struck back with a lengthy scoring drive. Quarterback Aaron Gilliam carried the ball four times with runs 8, 7, 6 and 14 yards. Gilliam hit Eyan Hitchen for a 20-yard scoring strike to pull the Spartans within a point, 15-14, with 1:11 left in the second quarter. That’s how the teams went into the locker room at halftime.

The play of the game was… Memorial kicker Luis Blanco’s 32-yard field goal with 11:55 left in the fourth quarter, which proved to be the game-winning play for the Titans.

The game ball goes to…Senior quarterback Davion Wilson. He rushed for 86 yards and 1 TD and also completed 8 of 13 passes for 140 yards and 1 TD.

Key stats…Memorial’s Ja’Coryn Baker rushed 9 times for 31 yards. JaQuan Holmes had four catches for 29 yards. Memorial rushed for 145 yards and passed for 140. Porter’s Joshua Evans-Pickens rushed for a game-high 101 yards on 28 carries and 1 TD. Aaron Gilliam added 85 yards rushing on 15 carries and completed 5 of 10 passes for 116 yards and 1 TD. Porter rushed for 234 yards as a team.