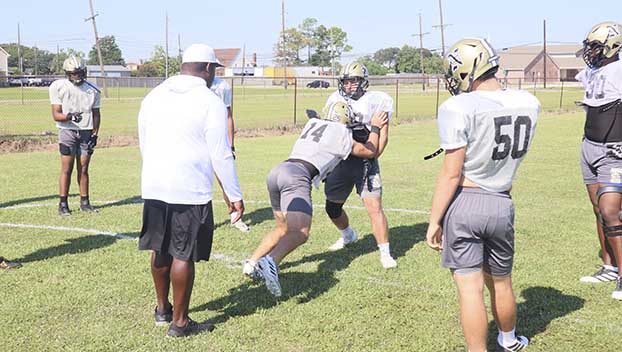 The Nederland Bulldogs entered the bye week with plenty of work to do starting the season 0-3 against a tough non-district competition.

While there are areas that need improvement before the district schedule starts next week, the team’s rushing defense has been a bright spot over the past two weeks, especially on the interior defensive line.

Against Silsbee, the Bulldogs held the Tigers to 70 yards on the ground. The defensive line consistently caught runners at the line of scrimmage and tackled well. The play of the game for the run defense came late in the fourth quarter when Nederland was attempting to finish off a comeback after scoring 16 points in three minutes.

With Silsbee trying to run out the clock, Nederland defensive lineman Cade Hollyfield sliced through the line and hit Tigers runner Dre’lon Miller for a loss of 5 yards.

“It felt good,” Hollyfield said. “I saw the tight end go a little wide. I had to stand up on that one. I saw the ball coming right through the middle.”

Despite the play, Silsbee was able to convert a first down on fourth and short to seal the game. But the performance was the second time in two weeks the Bulldogs were able to hold an opponent that likes to run to under 100 yards.

In Week 2, Nederland held Memorial to 98 yards on the ground.

“We have talked about it and have had some guys that have really played well,” Nederland Head Coach Monte Barrow said. “Joseph Dugat has led the squad up front. We lost a guy that started there for two years in Landen Caywood. We moved him to outside linebacker for what we need and his skillset. Joseph, Cade, Albert Simon and Drake Sturrock. Brady Corcoran also played defensive end and had a good game.”

“I think he had a hunch,” Barrow said. “You coach them to a point and you hope they have some instincts that take over. Cade has those instincts. He is also one of our most physical players.”

“The first few weeks we have made consistent efforts to get better,” Walker said. “That showed from Week 1 to Week 3… We have a lot of first-year players up front and across the whole defense. We just have to get better each week.”

That preparation has paid off. Dugat said the line’s attention to detail has driven the success.

“It comes down to how we have practice,” Dugat said. “We focus on down blocks and how we are going to work on double teams and stuff like that. A lot of teams focus on their run game. In high school, it is a big thing. You have to be able to stop it.

The Bulldogs are off this week and start district play Sept. 22 for a Thursday game at Fort Bend Willowridge.