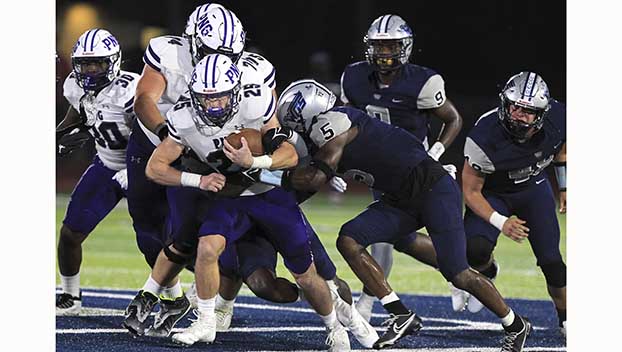 PNG running back Tommy Reed runs through a tackle. (Mark Pachuca/Special to The News)

ORANGE — Shea Adams put on a show, accounting for all four touchdowns as Port Neches-Groves bullied its way to a convincing 27-6 win over Class 4A state-ranked West Orange-Stark in non-district action Friday night at Dan R. Hooks Stadium.

Adams rushed for 75 yards on 10 carries and scored three touchdowns. He also caught five passes for 67 yards and 1 TD. Tommy Reed rushed for a game-high 112 yards on 24 carries. Cole Crippen completed 10 of 22 passes for 110 yards and one TD.

“I think the toughness we showed and the grit we showed, and the heart we went out and fought with really came through,” said PNG coach Jeff Joseph. “That’s a tough team (WOS) that plays a tough brand of football. We just tried to come out and match that and we played our butts off.” 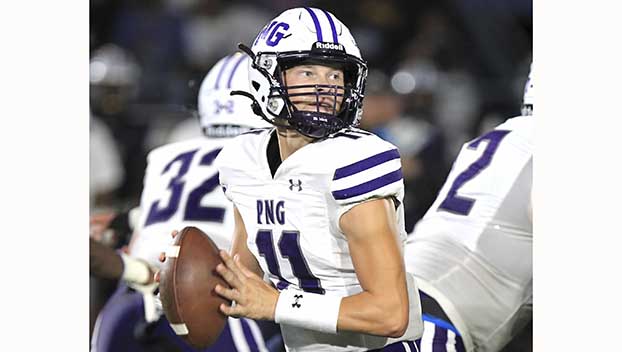 Cole Crippen scans the field. (Mark Pachuca/Special to The News)

The Indians (2-1) took advantage of their gifted offensive line to maul the Mustangs with a potent ground attack. PNG rushed for 279 yards and added 110 yards passing, amassing 389 yards of total offense.

“We were able to run the football and control the clock,” said Joseph. “We played great on defense and tackling in space. The offensive line, that’s going to be the heart of our football team. We are going to lean on those guys heavily the rest of the season.”

Leading 14-0 to start the third quarter, PNG received the second half kickoff and proceeded to march down the field for another score. The 10-play scoring drive featured Adams prominently. He carried the ball three straight times to start the drive with runs of 16, 2 and 3 yards.

Crippen hit Adams for 15 yards to the WOS 35. Adams capped the drive with a 21-yard TD grab from Crippen to extend the Indians’ lead to 21-0 with 7:53 left in the third quarter.

WOS (2-1) finally broke through with its first scoring drive of the game midway through the third quarter. Jamaal Shaw started the drive with a 10-yard run. Keyshawn Robinson hit Dakarion Judge on a 55-yard scoring strike to make the score 21-6.

PNG would answer right back with a scoring drive of its own. Crippen hit Adams for completions of 11 and 10 yards to start the drive. Adams capped the drive with a 25-yard TD run. The extra point was no good to leave the score 27-6.

“We had way too many penalties and pre-snap penalties. We have to get that part of our game cleaned up,” said Joseph on the plans for the off week. “We have to keep improving every week and that’s what this off week will be for.” 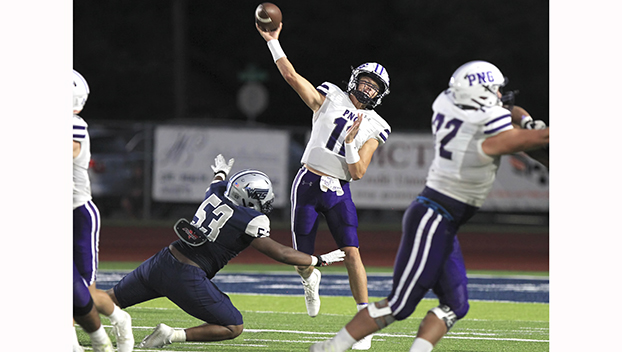 Cole Crippen (11) launches a ball against West Orange-Stark. (Mark Pachuca/Special to The News)

The game started out like a boxing prize fight with both teams feeling each other out for much of the first quarter. The Mustangs received the opening kickoff but were forced to punt on their opening possession.

PNG’s opening drive lasted just one play as Crippen was intercepted on the Indians’ first play from scrimmage by Jamaal Shaw.

WOS turned the ball over on downs on its next possession as Shaw was stopped for a 3-yard gain on fourth-and-five at the Indians 42. PNG was not able to do anything with the good field position and were forced to punt.

After the Indians defense forced a three-and-out on the Mustangs next possession, PNG was finally able to mount a scoring drive. They turned to the ground with Reed getting multiple carries. Shea Adams kept the drive going with a 3-yard quarterback sneak on fourth-and-one at the WOS 43.

Following a 6-yard run by Reed, Crippen hit Chance Prosperie for four yards and another first down. Reed followed with runs of 5 and 15 yards to give the Indians first-and-goal at the 10. Adams called his own number on a 6-yard TD run to give PNG a 7-0 lead with 20 seconds left in the first quarter.

The Indians added to their lead midway through the second quarter. Again, turning to the ground game with Reed and Isaiah Nguyen. PNG steadily moved the ball down the field. Crippen hit Prosperie for an 8-yard completion around runs of 8 and 5 yards from Reed. Nguyen entered the game with consecutive runs of 5, 7 and 7 yards.

Crippen’s 28-yard completion to Reid Richard put the ball at the WOS 12. Adams scored two plays later on a 10-yard run up the middle to extend the Indians’ lead to 14-0 with 4:22 left in the second half.

PNG was looking to add to its lead before halftime. Nguyen ripped off a 50-yard run to the WOS 16. But consecutive penalties hampered the Indians, who had to settle for a 40-yard field goal attempt. A low snap altered the timing a bit and Andres Sandoval’s attempt came up just short as PNG went to the locker room up 14-0.

Shea Adams scoring the game’s first touchdown on a 6-yard run. That set the tone for the offensive line play and gave the Indians a lead they would not relinquish.

Shea Adams who scored all four touchdowns. He rushed for 75 yards and three touchdowns and caught five passes for 67 yards and one touchdown.

Port Neches-Groves in on bye next week before returning to action Saturday, September 24 with a 1 p.m. game at Fort Bend Marshall. West Orange-Stark closes out non-district action next Friday with a 7:30 p.m. game at Newton.