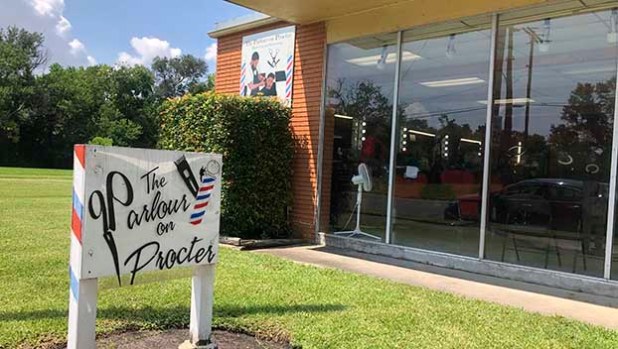 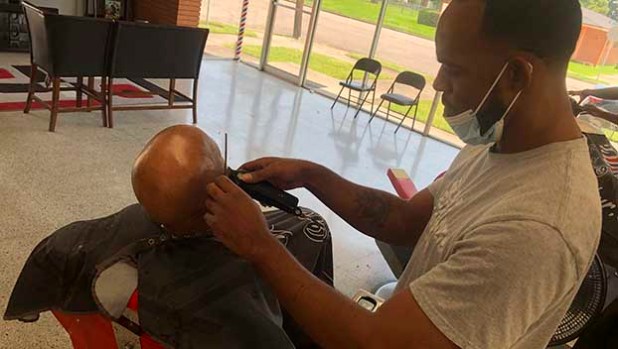 Kevin Green, who has worked at Parlour on Proctor Barber and Grooming for more than a years will soon open his own barbershop on Atlanta Avenue. (Monique Batson/The News) 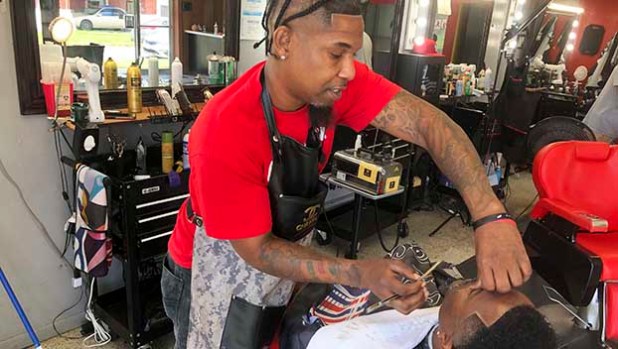 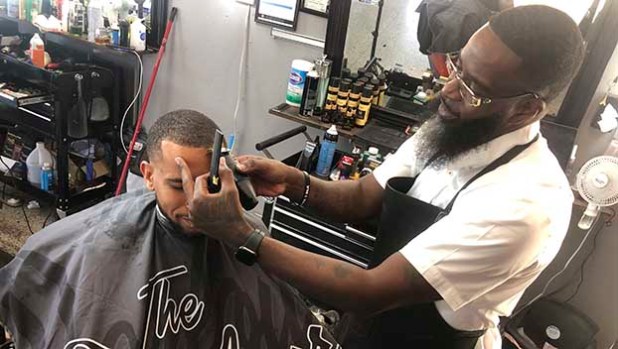 Settled on Procter Street just a few blocks down from Woodworth Boulevard sits a barbershop filled with camaraderie, patriotism and a unique start.

Where Hurricane Harvey drove some people out of Southeast Texas, it brought Kris Hardie and his wife, Shawndrika, to Port Arthur.

While this is her hometown, Hardie is from Washington D.C. But it was overseas that the two veterans — him of the U.S. Army and her of the U.S. Air Force — first crossed paths.

“We met in Germany in 1998,” he said. “We were both stationed over there and locked in ever since.”

After her retirement from the Air Force in 2017, the couple moved to Texas.

“We originally went to San Antonio until we started seeing Harvey, and she wanted to come back and help her family,” he said. “I remember looking at it on the news in San Antonio and thinking, ‘that’s impossible. Boats going through the streets? That’s impossible.’”

But the two soon arrived at a town where boats were indeed going through streets and began helping repair her mother’s home.

“We didn’t have a place to live,” Hardie said. “It was an emotional, mental experience.”

It was an unexpected comment from a veteran who had been stationed overseas.

“We’ve been through some stuff, but this hit so close to home,” he said.

Having entered school for barbering before returning to the U.S., Hardie finished school at Lamar State College Port Arthur.

“The man who used to own this barbershop came by the barber school and said, ‘hey man, you should come by my shop.’ He was also a veteran,” Hardie said. “A few months later he moved and I took over the lease, and eventually my wife and I purchased the property. Everything just fell into our lap. God lined everything up for us.”

While part owner of Parlour on Proctor Barber and Grooming, his wife is also a realtor in Southeast Texas.

It was a story Hardie told while giving Timothy O’Neal a haircut. The Port Arthur native said he’s been a regular at Parlour on Proctor for years.

“I trust my barber,” O’Neal said. “The last one I went to had cut me a couple of times.”

And trust was almost a theme of the scene, as shop manager Quenten Fontenot told his story while giving a straight razor shave to a man that never flinched.

Fontenot, who has been practicing barbering for more than 20 years, came to Port Arthur from Houston approximately eight years ago.

“This is originally where I’m from,” he said. “I missed home.”

But perhaps the biggest display of trust came from the center of the room, where Parlour on Proctor employee Kevin Green spoke of the barbershop he’ll soon be opening for himself.

He previously worked at Kutz 4 Kingz on Atlanta Avenue for 13 years, but the owner passed away. Recently he purchased the building.

“I’ve been remodeling it while working here, so it’s going to be a fresh look,” Green said.

But at the mention of the two going from co-workers to competitors, both laughed.