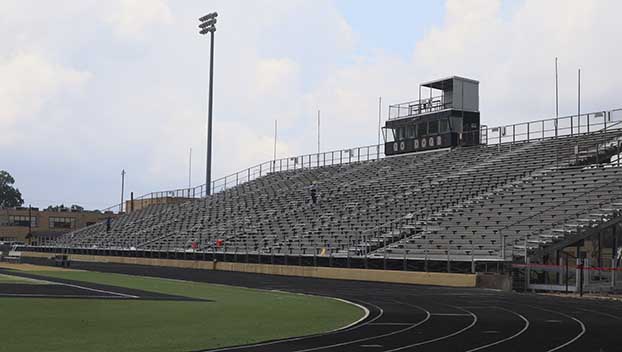 The Nederland Bulldogs have to wait to play their first game at Bulldog Stadium, as ongoing construction was not going to be complete before Friday’s game against Silsbee.

Nederland ISD Superintendent Stuart Kieschnick said the stadium should be ready for fans by early next week.

“With material shipping problems, we had to make a call by noon Wednesday as to whether or not we were going to have a game at the stadium, and the stadium was not going to be through for the Friday night game,” Kieschnick said.

The two teams will play at Provost Umphrey Stadium at Lamar University, and fans who already purchased tickets or have season tickets will still be able to get in the gates at Lamar.

The game was originally scheduled as the first home game for the Bulldogs in 2022, but construction delays and material shortages prompted Nederland Independent School District to move the game.

Kieschnick said workers are reinforcing the bleachers in the stands.

“The aisles were widened, which meant some seats had to be cut,” Kieschnick said. “We just got some of the building material to reinforce those seats from underneath. The last few arrived (Tuesday) night. That is just not enough time to get it done in a safe manner.”

The superintendent said the district recently received the last parts to complete the wheelchair ramps on each side of the stands.

“They should have one of them ready Wednesday, but I did not feel confident all four of those ramps would have been ready by game time,” he said.

Kieschnick also said the delays have to do with the recent amount of inclement weather the area received with rain forcing workers to pause.

Nederland’s junior varsity games are scheduled to take place at Bulldog Stadium in the coming weeks, but the varsity squad will have to wait a little longer to play on their home turf.

The Bulldogs will be off on a bye week next week and then on the road for their first district game against Fort Bend Willowridge.

Nederland’s next varsity home game will be Sept. 30 against Dayton.