Titans band marches to beat of its own drum major 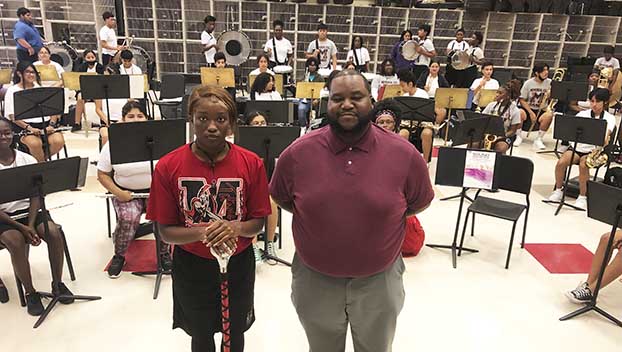 During Memorial High School’s first football game of the season last week, two things were undeniable — the score and the band.

And there was no stopping the resounding applause when Titans Drum Major Amari Bullard began the halftime performance by bending backwards until her head touched the ground before rising back to her feet.

While a difficult routine, the high school senior said she typically leads the process in creating them.

Her dance background plays into her choices, once a student of Debbie’s Dance in Groves. Bullard began dance classes at 10 and now takes ballet, jazz, clogging, contemporary and modern musical theater, hip-hop and pointe.

On top of being drum major for the third year, she’s an honor roll student preparing to run for student council, has led the school’s gaming club, participates in debate and is a member of the National Junior Honor Society.

And to do it all, she drives in from Baytown, as her mother’s employment at the school allows for her enrollment.

But after graduation, she’ll leave her flute, baton and ballet shoes behind.

“I want to go to New York University and be an accountant,” she said. “I do not want to do dance or band or anything. I really just want to focus on academics. I would like to become a financial manager.”

But until then, she continues leading the band in the best ways possible.

“All of my sophomore year and freshman year I wasn’t as dedicated to concert band as I should have been, but then once I realized how much I actually loved music, I got more serious about it,” Bullard said. “Realizing that hard work pays off, I realized that I do need to practice instead of just being drum major and marching around. Sometimes I need to take the time to appreciate music.

“Last year I felt different about band for the first time ever. This year I’m really implementing that into my plan because I don’t want to drift off into this drum major mindset when I still have the capabilities to be a flute player.”

That mindset is instrumental when belonging to a band that is as much about entertainment as it is about marching. 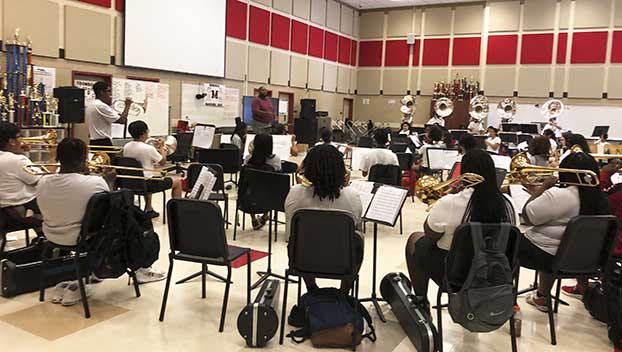 Band Director Alex Frazier, who is in his 12th year at Memorial High School, said the incorporation of the two follows his experience in college.

“Myself and one of the other assistant band directors are both graduates of Southern University in Baton Rouge, Louisiana, and that band is really steep in the traditional marching style that you would see, ala Michigan State or Ohio State,” he said. “But of course with it being a historically Black college, there’s a little bit of a different flair. So that’s been something we have been really happy to be able to bring to our students —giving them marching skills but also to giving them a chance to play music they like. Play things the crowd will respond to, and try to cater to our crowd.”

Frazier began his band life in Port Arthur where he played saxophone.

“I was actually one of the first members of the Memorial High School band,” he said. “I went to Lincoln the last year that we had three high schools, so when we had the combination of the three schools, I was in the band. I was a sophomore and played all through high school.”

Returning to where it began was important.

“I really felt like in high school that we had a lot of musical talent,” Frazier said. “But we were not in a place where we were not located near any of the historically Black schools that I was interested in. I always had a goal to come back home and expose that to our area and hopefully even bring it away from home. We’ve been able to do that with our competitions.”

They’ve had 12 consecutive wins in the last five years.

The band begins with three weeks of weekday practice during the summer from 8 a.m. to 4 p.m. to learn the fundamentals. Frazier said that allows them to begin the year focusing on practicing for each game’s individual routine.

“Friday nights, those are always the best,” Bullard said. “The energy is always up from the crowd to the band to the cheerleaders — everything.”

And that, she said, is what she’ll miss the most.