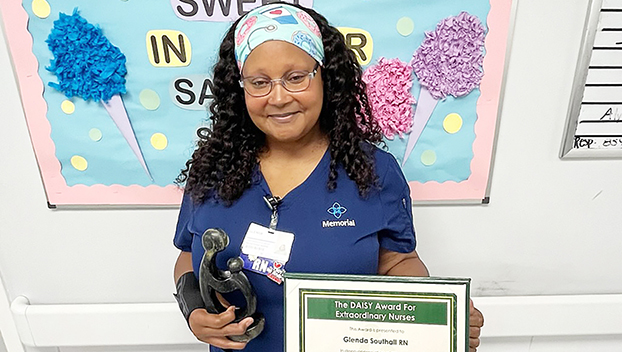 DAISY is an acronym for Diseases Attacking the Immune System, according to The DAISY Foundation. Awards are presented to extraordinary nurses who are honored for the “super-human” every day work they do for patients and families.

Southall, 47, is a licensed registered nurse at Lake Charles Memorial Hospital in Louisiana

Her mother, Jacqueline Credit, was not surprised at her daughter’s achievements and success, adding Southall is a living miracle.

“I don’t just say that because of what she has achieved or because she’s my child,” Credit said. “My child has gone through many health challenges.”

And even through the challenges, Southall continues onward.

In the nomination letter to the Foundation, one of Southall’s patients said her passion and love for the job helped the writer feel safe.

Southall told the patient of some of her physical challenges that are the same as the patient.

“It is transparent that to Glenda, being an RN is not just her job, it is her passion. It’s also transparent that her ‘spirit’ and her love for life is truly connected to being an RN,” the letter read. “She truly honors her love of people by being an RN. She was honestly a bright light during my 8-day state that included some dark hours and days.”

Southall lives in Lake Charles with her husband, Alvin, and two sons Alvin Jr. and Gavi. She also has an older daughter, Ke’yana Graham of Houston and one grandson, Cade.

The DAISY Foundation was formed in November 1999 by the family of J. Patrick Barnes, who died at age 33 of complications of idiopathic thrombocytopenic purpura. His family was touched by the nursing care he received while hospitalized, according to the Foundation.