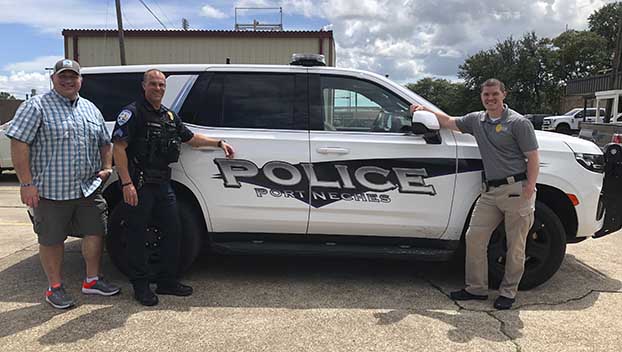 PORT NECHES — What started as an attempt to create a gym for police officers could soon provide hundreds of economically disadvantaged Port Neches children with Christmas presents — and more.

“Obviously with COVID there were no group activities, so it got set aside,” Heilman said. “Now that everything has come back and civic events are happening again, we’ve reignited the flame, so to speak.”

Heilman said the estimated $50,000 cost of creating a workout facility would require donations, so four officers from PNPD began working on a nonprofit.

“To make it favorable for them to donate, it would need to be tax deductible,” Heilman said. “So that was the original thinking, but it’s kind of morphed into more than that. Now the focus has shifted from not just the workout facility for the officers but also community support like Blue Santa and National Night Out.”

Early on in the process the group recruited Aaron Tabor, who retired from the Groves Police Department May 31 after 13 years. Tabor initiated GPD’s National Night Out and Blue Santa Program.

“All of us have no experience with this, so we’re learning. He’s got all the experience and he’s a good friend of ours,” Heilman said of Tabor. “Of course all the three Mid County departments work together, we all know each other.”

In order to create the workout facility, the group would need to solicit enough funds to purchase the equipment, but also find a place to house it — options including the former Port Neches Fire Department or building something from scratch.

“I come from a different agency and it was instilled in me essentially that working out was the thing,” said the former Longview police officer. “Not only is it a mental health thing — especially as a first responder. There’s so many different things that we come across, whether it be a situation that we really can’t do anything about and we’ve got to call Child Protective Services and get that ball rolling.

But, to Thompson, it’s also personal.

“There were a few instances when I was in training that I had a few foot pursuits and I got tired of losing,” he said “There were three, very quickly in training, that got away and it upset me. To this day I don’t know who they were or why they ran. That’s what got to me. These people got away because I was unfit. That means I didn’t protect my citizens.”

Heilman said physical fitness requirements vary by department — some require it, some don’t and some offer incentives.

“Physical fitness and police in general is very necessary, whether it be because you’re chasing down the bad guy that just broke into somebody’s house,” Thompson said. “They’re running from you for whatever reason, and you want to have that physical capacity to be able to chase and apprehend them and figure out what’s going on.”

But as the group talked, the plans grew.

And this year the Port Neches Police Department hopes to host its first Blue Santa program, which provides holiday gifts to families in need by utilizing the help of school officials.

“We’re going to focus on the Blue Santa program, so that’ll give us plenty of time between now and December to do it,” Tabor said. “As we did in Groves, we got the kids’ names from the schools and we’d serve 200 to 250 kids through that program. Hopefully it’ll grow bigger than that at some point.”

The group has also discussed fundraisers, such as having a dunking booth at RiverFest.

“One thing I’ve learned working down here is the community is a huge supporter of all the safety services,” Heilman said. “All we have to do is ask and the people will come. We may have to ask a little harder and do more than just say, ‘hey, can I have some money?’ But our members are willing to do that. And they want the facility and to get out in the community and do Blue Santa and National Night Out.”

The association does have its EIN number, and is in the process of obtaining a bank account.

Those wanting to donate or get involved can do so by finding “Port Neches Police Officers Non-Profit” on Facebook or calling the Port Neches Police Department’s non-emergency number at 409-722-1424 and asking to speak to a member of the nonprofit association.