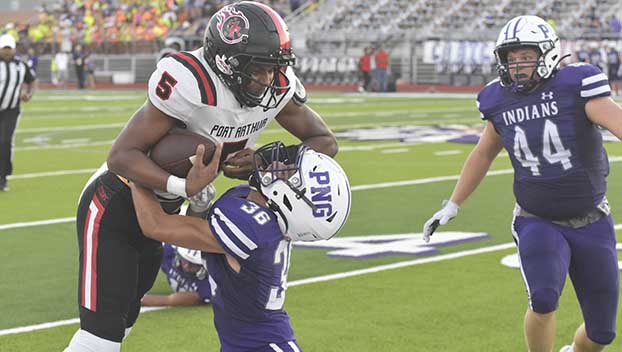 He lead the Titans to a convincing 50-15 win over Port Neches-Groves in non-district action Friday night at The Reservation.

Wilson, who transferred in after playing at Spring DeKaney High School last year, rushed 17 times for 97 yards and four touchdowns.

He also completed 11 of 15 passes for 138 yards. Sophomore Ja’coryn Bakers was also very impressive in his first varsity start, rushing for 14 times for a game-high 167 yards and two TDs.

“The score was good, but we have a lot of stuff we need to clean up,” said Memorial coach Brian Morgan. “I thought our kids came out and played fast and executed. Our skill players across the board are really talented, so if we can get them the ball and not have mental errors, we can be successful.

“Wilson is very talented. He’s different from the one he replaced (Jah’mar Sanders). He’s not as good a runner, but he’s a better thrower. He’s going to get better. He missed some stuff and some deep balls that could have gone for touchdowns, but overall, he was good tonight.” 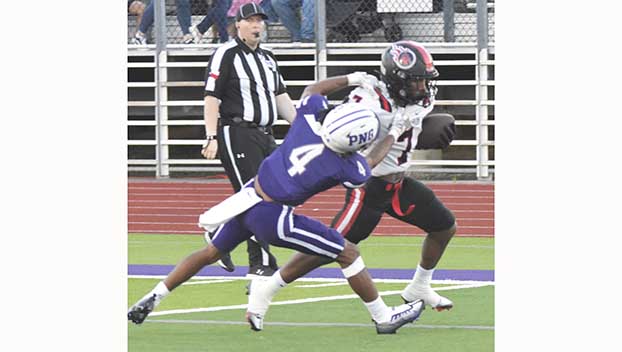 Memorial running back Ja’coryn Baker (7) fights off PNG’s Dylan Lawless on his way to the endzone. (Chris Moore/The News)

Trailing 37-3 at halftime, PNG came out and scored twice in the third quarter. Cole Crippen scored the first touchdown. Trying a quarterback sneak on third-and-1, Crippen emerged from the pile and raced 41 yards for a TD. The extra point was no good.

Tommy Reed scored on a 6-yard TD run on the Indians’ next possession. He carried the ball four times for 37 yards on the drive. Due to a bad snap, the extra point was no good to make the score Memorial 37-15 with 2:18 left in the third quarter.

The Titans closed out the scoring with a pair of touchdowns in the fourth quarter. Wilson scored his fourth TD of the game on a 10-yard run. Daevon Iles returned an interception 65 yards for a TD to close out the scoring.

“The atmosphere was awesome. Our people love football and it’s a fun place to play, but it’s not fun when you play like we did tonight,” said first-year PNG coach Jeff Joseph. “You can’t turn the ball over six times and expect to win.

“It’s a rough start for us. It’s my fault as a coach. I didn’t do a good job of preparing them to play in a game like that. It was a good test for us, but the real test is to see how much we can improve over the next three games.” 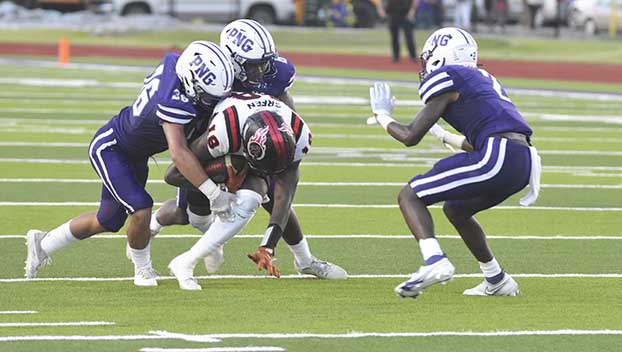 The Titans received the opening kickoff and gambled on fourth-and-2 from their own 44 and Ja’coryn Baker was stopped for no gain.

PNG was the beneficiary of some excellent field position. A pair of completions from Crippen to Prosperie, the last of which gave the Indians first down at the Titans 19. However, the drive stalled and Andres Sandoval’s 25-yard field hit the upright and was no good.

Memorial didn’t waste any time scoring on its second possession. Baker took the handoff and raced 71 yards for a touchdown to give the Titans a quick 7-0 lead with 6:45 left in the first quarter.

The Titans defense ended the Indians’ second drive when Darrrell Thornton intercepted Crippen. He stepped in front of Kohlton Droddy who rolled out to the right looking for a screen pass.

Memorial turned the turnover into points. Baker capped the 40-yard drive with a 10-yard TD run on fourth-and-two. Wilson kept the drive going with an 18-yard run to the 18. That extended the Titans’ lead to 14-0 with 35 seconds left in the first quarter.

PNG fumbled the ensuing kickoff, which was recovered by Nolan White at the Indians 28. Wilson called his own number on a 3-yard TD run to push the Titans’ lead to 21-0 with 10:08 left in the second quarter.

The Titans forced a three-and-out on the Indians’ next drive. Wilson started the Memorial drive with a 24-yard completion to Quinton Harper. Wilson followed with runs of 9 and 14 yards and finished the drive with a 1-yard TD to make the score 28-0 with 6:44 left in the second quarter.

PNG finally put together a scoring drive on its next possession. Crippen hit Shea Adams for a 56-yard completion to the Memorial 19. The drive stalled and the Indians had to settle for a 25-yard Sandoval field goal to make the score 28-3 with 5:32 remaining in the second quarter.

Memorial answered right back with another scoring drive. Wilson hit Caleb Goodie for a 37-yard completion and Baker added a 21-yard run. Wilson bullied his way into the end zone from 11 yards out. The extra point was no good to make the score 34-3 with 2:53 left before halftime.

Jayce Robertson intercepted Crippen on the Indians’ next possession. That led to a 25-yard field goal by Luis Blanco as time expired to give Memorial a 37-3 halftime lead.

Memorial’s Ja’coryn Baker broke through the line of scrimmage and raced 71 yards for the game’s first score. The Titans would never trail in the game.

Memorial’s Caleb Goodie caught five passes for 61 yards. JaQuan Holmes had three catches for 32 yards and Quinton Harper had two for 30 yards. As a team, Memorial rushed for 286 yards. PNG’s Cole Crippen completed 13 of 26 passes for 185 yards and three interceptions. Tommy Reed rushed for 87 yards on 15 carries and 1 TD.

Port Neches-Groves travels to Beaumont next Friday for its first road game of the season with a 7 p.m. kickoff against United.

Memorial returns home to host Nederland in a 7 p.m. kickoff next Friday.