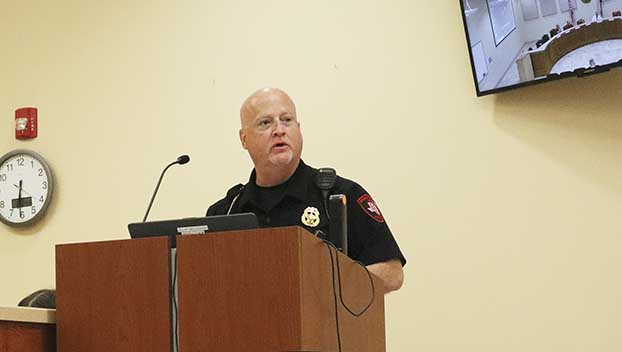 BRIDGE CITY — Safety was one of the primary points of discussion at the Bridge City Independent School District meeting this week.

District’s Police Chief Cliff Hargrave addressed board members and spelled out his plans for BCISD and his two officers for the upcoming year. Hargrave was hired in March.

“Our No. 1 goal is the safety and security of the students, staff and property,” he said. “Everything else is peripheral in my opinion. That is our goal. We prevent, suppress and investigate any criminal acts or intentions. We can make arrests and issue situations whenever it is warranted. We are a liaison between ourselves and Bridge City PD and the fire department or any first responders.”

Hargrave said the officers will testify in court if needed.

One of the more important jobs is offering a peace of mind, he said.

“Lately I have been getting incredible feedback from parents at the elementary,” he said. “Just seeing us makes them feel good.”

Between the three gentlemen making up the district police force, they have a combined 110 years of experience.

Hargrave, a Bridge City High graduate, is joining after 37 years of experience, where he has worked for the Orange County Sheriff’s Office, Orange Police Department, U.S. Marshals and is a former captain over patrol, narcotics and criminal investigations.

“Our students’ safety is at the forefront of everything they do, and we are absolutely thrilled that they will be joining our team this year,” Bright City ISD Superintendent Mike Kelly said.

Hargrave said the district acquired a system to identify license plates, which was outsourced to BPD in the past.

The officers also have uniforms unique to BCISD.

“I wanted to the kids to get used to seeing a cop in uniform,” he said. “I want them to realize that we are not all that scary. That has been a big hit.”

The chief said the department is in the process of buying “modern equipment” that would help officers respond to a life-threatening event.

“Luckily the stuff we are buying, Officer Talbert, Officer Harmon and myself, not only are we familiar with the stuff, we are the instructors,” he said. “When other departments say they need training in this or that, we are the ones doing the training.”

Hargrave said much of the work and preparation his department has done was based off the recent shooting in Uvalde.

“One of the rumors that turned out not to be true was still a possibility,” he said. “I bought some breakout boxes. They are installed (on the campus). If Bridge City PD needs to help us, they can smash the glass, grab the key and have access to anywhere in the building. I didn’t want a situation where someone is looking for a key.”

“We may do another for subs or anyone that wants to take it,” he said.

The department has also started working with the justice of the peace to look at the truancy process and seeing when police need to get involved.

All three officers do daily checks to make sure all exterior doors to all campuses are secure.

“Not only do we do it every day, if nothing is going on, we do it twice a day,” Hargrave said. “Every morning, after I watch the traffic, I check all the doors for the elementary, admin and intermediate. The same thing is going on at the high school and middle school. That should never be an issue here.”

The department is also making maps for doors represented by numbers that will go out to each emergency response department.

“They will have them in case we have to say their is something at Door 15 at the elementary and they will know exactly what we are talking about,” Hargrave said.