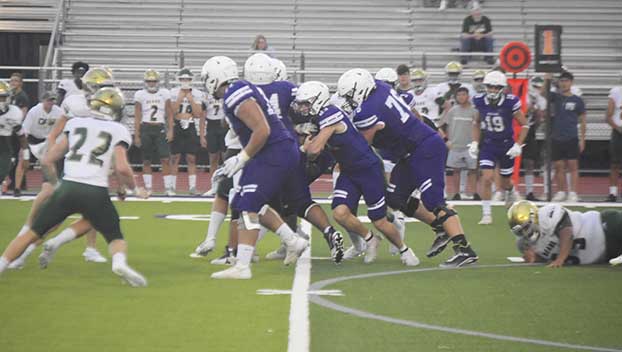 There was a lot to be learned in the inclement weather that rained down on area football scrimmages Thursday. Port Neches-Groves moved up the start time of the varsity scrimmage against Little Cypress-Mauriceville in an attempt to avoid potential weather delays or cancellation, given that is was the only scrimmage for PNG this year.

Both sides were able to get some work in before a lightning strike near the stadium forced fans away from their seats and players and coaches inside.

PNG’s offense featured a heavy dose of running early. It seemed like new head coach Jeff Joseph and offensive coordinator Cade McCrary were at least trying to lean on a talented offensive line to set the tone. Thomas Reed saw the bulk of the carries and bounced back well after an early fumble. Most passes from quarterback Cole Crippen were short and intermediate, likely by play design. 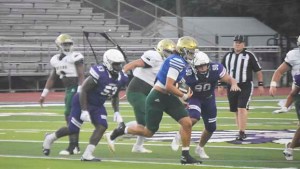 Joseph said he and his staff wanted to establish the run for multiple reasons.

“We wanted to make sure our team knows that no matter the situation, our team is going to have to execute running the football,” he said. “We could be playing in rain next week for all we know. It was working to get those offensive linemen in game shape and our running backs in game shape.”

The defense flew around the field and seemed unafraid to strike, but the coach said their was some hesitancy, likely due to the new system and opponent.

“I think we started off a little timid, just running a new system against somebody for the first time ever,” he said. “I think there was some uncertainty and uneasiness. We didn’t spend a ton of time preparing for our scrimmage opponent. That might have been part of it.” 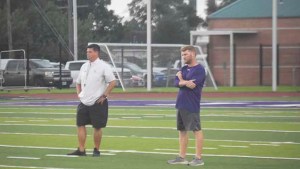 LCM Coach Eric Peevey and PNG Coach Jeff Joseph watch on as their teams scrimmage against each other. (Chris Moore/The News)

Going into the scrimmage, Joseph wanted to focus on getting the basics down and said he felt like the team was able to accomplish that in the limited time.

“We came out a little slow,” he said. “With some of the general stuff like operating the clock, getting plays called and getting lined up, we were able to execute some things. We did some good things. Obviously it is our first scrimmage and we have a lot of room to grow.”

Joseph said his team will have to learn to come out firing in order to be ready Week 1 against Memorial.

“We can’t come out slow,” he said. “We have to come out with more excitement about being out there and playing football and playing together. We have to be more excited for each other. I feel like our energy level was a little down. That is probably a little of the uneasiness and the newness. It was as much my fault as anything, but we have to get that fixed for next week.”

LCM and PNG did not return to the field after the lightning strike. The teams planned to meet again Friday but were uncertain due to forecast at the time this story was written.