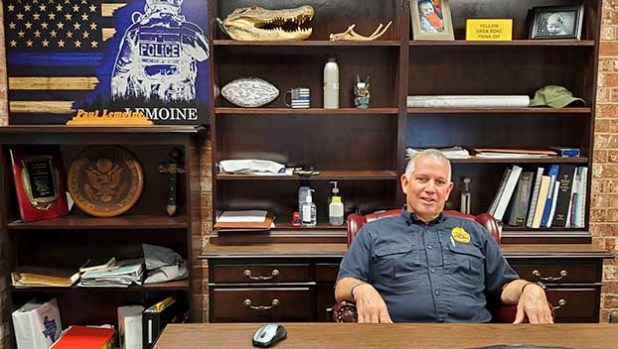 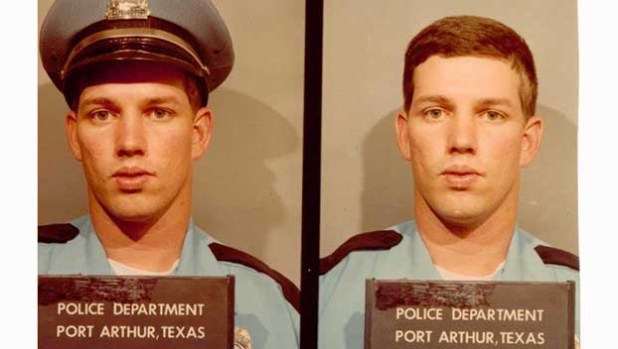 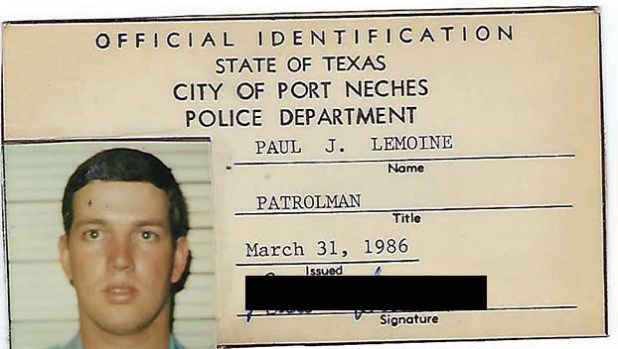 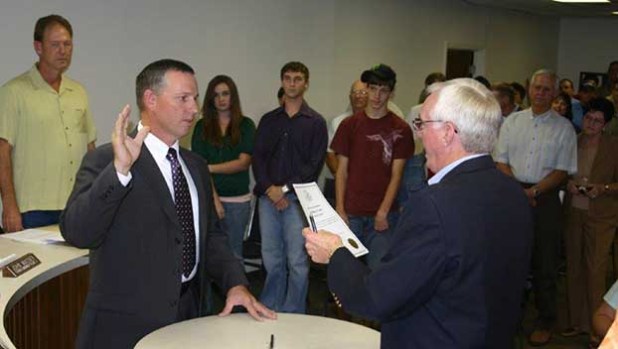 Paul Lemoine, left, being sworn in as chief of police by Port Neches Mayor Glenn Johnson in 2008. (Courtesy photo) 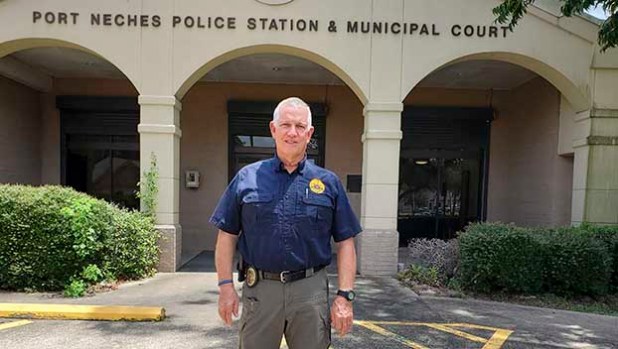 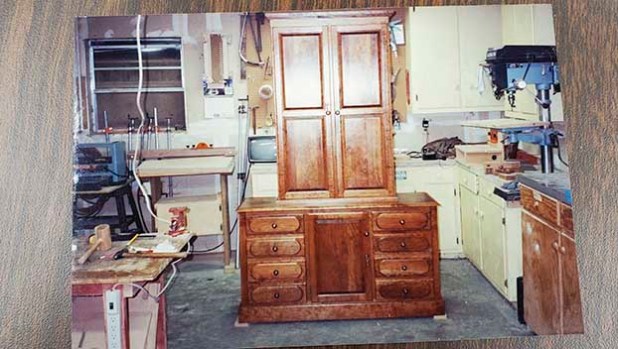 Lemoine is also a carpenter and constructed this cherry wood cabinet for the previous police chief. (Courtesy photo)

PORT NECHES — After almost 38 years in law enforcement, one of the longest-serving local lawmen is ready to hang up his badge.

Port Neches Police Chief Paul Lemoine made the city aware of his intent earlier this year, and the job position was posted last week.

City Manager Andre Wimer said after the submission process is complete, city staff will review the applications and make a determination on how to proceed.

How it all began

An avid outdoorsman, Lemoine was first eying a career in wildlife management while attending Stephen F. Austin State University. The university quit offering the degree program in forestry engineering as he was in his second year of the program, so he switched schools and paths.

He began some part-time work as a security guard when he saw advertisements in a newspaper for Port Arthur and Beaumont police officers. In his mind, he saw it as an opportunity to work outside, experience a career that’s ever changing and help others.

He began his career in law enforcement in November 1984 with the Port Arthur Police Department, then moved on to Port Neches, where he was hired March 31, 1986, by then-Chief Charles Ray Bennefield.

Lemoine moved through the ranks and while under Chief Gene Marsh attended the Federal Bureau of Investigation Academy. He applied for the program prior to Sept. 11, 2001, but didn’t go until 2006.

The shelf behind Lemoine’s desk has memorabilia showing his personality. Having switched offices fairly recently, he hasn’t moved everything to his current space but there are pieces such as a signed football, framed photos, artwork depicting a police officer, an alligator head, deer antlers and a yellow brick he received from the FBI Academy.

The brick is a souvenir from successfully completing a six-mile obstacle course, he said.

And when planning his career, he also opted to get in leadership training and attended Law Enforcement Management Institute of Texas, which he said is like Texas’ version of the national academy.

In a 38-year career, filled with hurricanes and various crimes, there is no shortage of events that stick out.

“A lot of funny stuff and not-so-funny stuff,” Lemoine said as he launched into a story of bringing a small alligator to the police station and leaving it in a coffee room.

“I waited for the guys to come in off graveyards, for the day shift,” he said telling the story. “One officer asked what’s that noise as the small gator was hissing. The room quickly cleared.”

Lemoine dealt with wildlife many times — like the 10-feet-long gator off Hogaboom Road.

“I had to get help on this one,” he said, describing how he put a rope on the gator but needed a second person to hold the rope from behind without giving slack.

“I had to get another rope on him before I could get on top of this big boy. We needed to make sure he’s under control.”

As Lemoine got closer, the alligator began to back up, prompting him to remind the other officer what to do. But ultimately the gator was captured and no one was bitten.

The veteran law enforcement officer works to impart wisdom on younger officers as they arrive.

When the new officers come in, he explained, they sometimes look for those high-octane calls with the lights and sirens, so he tells them of a call he made late one Christmas Eve.

An elderly woman heard noises outside and believed someone was trying to get into her home.

“I get over there, and generally when you get a call like this, they just say shine your light around, check the yard and if everything’s OK, I don’t need to talk to you,” he said of the suspicious person call. So he walks around, checks the yard and windows then goes to talk to the lady.

“She had cookies and milk out and she lives alone,” he said. “I go inside and start to figure out she’s lonely. I said it’s about time for my break. If you don’t mind I’ll take it here. I hung out with her, talked to her, just visited with her. Stuff like that happens and I tell these guys when you get a call of some minor thing, pretend it’s your grandma. Take your time, go over there.”

Lemoine said this is important to the individual who called the police, and that’s how you connect with the public.

He also recalled a time when a different elderly woman called police for assistance and he and his partner came to her aid.

It was about 2-3 a.m. on a hot summer night and the inside of the woman’s home was so hot, he wondered how she was living there. He asked if she had an air conditioner and she said, “yes,” but when he went to check he noticed the coils on the air conditioner were dirty.

He wasn’t going to leave the woman in those conditions, so he and the other officer took the coils outside, cleaned and reinstalled it. After that the AC blew cold air.

This type of Good Samaritan action wasn’t police work but still was a way to help the public.

Lemoine plans to officially retire in October, take a break and then start doing the things time didn’t allow for while holding down the job as chief.

He helps a friend who manages cows, as a woodworker he’ll do some carpentry, and work on expanding his garden so he and his wife Sharon can do some pop-up Farmer’s Markets.

He is a master beekeeper with a number of hives and bees. They help with the success of his garden.

He and his wife jar the honey, fruits and vegetables from their garden.

And he has chickens.

When he does finally retire, he’ll be just as busy as one of his bees.

Lemoine has been active in a number of organizations, including the Port Neches Chamber of Commerce and his church.

Wimer, who has worked with Lemoine, said he has been a tremendous police chief for the city’s residents.

“He has been actively engaged in the community and I very much appreciate all of his efforts during his tenure,” Wimer said.

Mayor Glenn Johnson said Lemoine is one of the nicest people he has ever met.

“He’s professional, smart, handles the job impeccably and is very good with citizens of Port Neches and any other organization he works with,” Johnson said. “You always hate to see someone like Paul Lemoine leave, but at the same time he’s earned that right to retire. We wish him and Sharon the absolute best, and as they say, ‘I know where he lives.’”