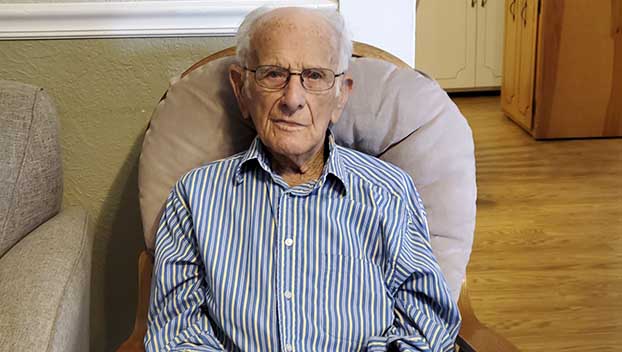 Benny Todd of Groves is celebrating his 100th birthday Aug. 13.

At 99 years of age — his 100th birthday is Saturday — Benny Todd is a rare individual.

A Mississippi native, the long time Texas resident is a World War II veteran, a church deacon, father of three and has held season tickets to Port Neches-Groves High School football games for more than 60 years.

I sat across from Todd as I interviewed him for a recent story. His sense of humor was apparent right off the bat. Since Todd has hearing issues I used a whiteboard and marker to aid in communication. After being introduced by his daughter Marlyn Trahan, I took my seat and wrote ‘veteran?’ as I verbally asked him my question.

A sly smile moved across his face as he answered, “I won World War II.”

And that was the icebreaker.

He was stationed in North Africa and a little town in Southern Italy and in Naples, Italy for a short time. He held various jobs while in the military and did some work in the carpenter shop and “just being a G.I.”

Todd graduated from Thomas Jefferson High School in Port Arthur prior enlisting. He soon found that it difficult to find a job because no one wanted to hire a draft-aged young man.

One day he stopped at the Post Office to mail a letter and a military recruiter was sitting there.

“I stopped and talked to him a minute. I had to call my mama to come get the car,” Todd said of quickly enlisting in the U.S. Army Air Corps.

Being in the military wasn’t bad, he said. You learned discipline and other things. The drawback was in wanting to come home.

He met his wife and love of his life when visiting his sister in Mississippi. Audie, the woman he would later wed, lived next door to his sister. Audie was a real life Rosie the Riveter who helped weld planes during the War.

The two were wed for more than 75 years, with Audie passing away earlier this year, a month from their 76th anniversary.

After the military the couple put down roots in Groves, and Todd went off to work at the “rubber plant” as locals affectionately called Goodrich. The couple raised three children.

First Baptist Church Groves is a big part of Todd’s life and he is likely the oldest member there. He’s also served as deacon for 66 years.

While we talked, Todd nodded toward the back door and asked if I had looked outside, so I did. Maryln explained he has a chair on the back porch and likes to spend time out there looking at the flora and fauna.