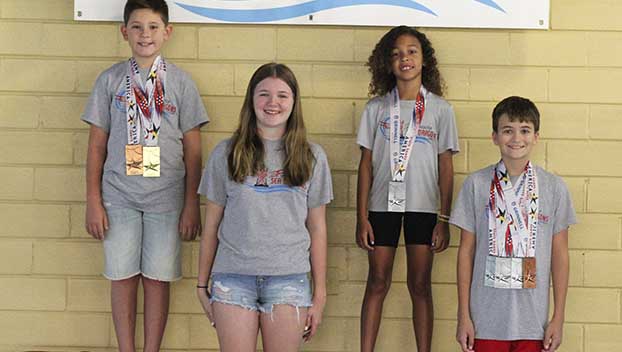 Several area swimmers came home from a national competition with hardware this summer.

The Spindletop Seadragons had four swimmers qualify for nationals and attend State Games of America in Iowa at the end of July.

Alexandria MacNeil, 12, Cooper MacNeil, 10, Camille Kringle, 7, all from Port Neches, represented the Seadragons, along with Kaison Guy, 11, of Nederland. 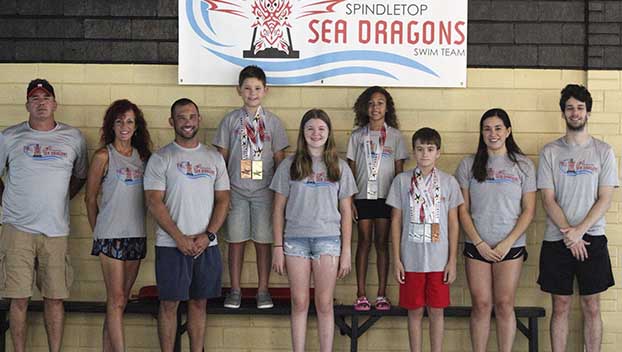 Donnie MacNeil, the team’s head coach and father of two of the swimmers, said he was happy with how his team competed.

“It is pretty awesome,” he said. “I try to show the team that there is more out there. There are colleges that follow. There is a lot out there.”

The coach said the contest was about more than medals and added he just wanted to see them perform as well as they could.

“I’d rather them get last place and drop time than get first place and add time,” he said. “That is what we teach our swimmers. You can’t control what is going on in the other lanes. You can control what you do. You put in the work and do your best.”

Hard work paid off for Alexandria MacNeil, who competed against her father in the 50-yard breaststroke.

“Up to that, I was telling her that I was going to whip her and she said I wasn’t,” the coach said. “Anyway, she beat me by about four seconds and she is 12. She has the bragging rights now. I need to start coaching myself.”

Donnie MacNeil said Guy has been competing against 9 and 10-year-olds. Prior to the national contest, Guy had a birthday, which jumped him up to the 11/12-year-old division.

“He was going against kids that were 23 months older than him,” the coach said. “He did amazing to perform the way he did.”

The organization’s fall swim is starting soon, but Donnie MacNeil said the fall season is more designed to keep swimmers in shape than it is for competition.

“We have a lot of swimmers that play other sports, so they might only come once a week,” he said. “It gets them in the water as opposed to them not being in the water for seven or eight months.”

During the summer, the Seadragons swim five times a week to prepare for competitions. The team often uses the pool at C.O. Wilson Middle School in Nederland. Donnie MacNeil said he would like to see Port Neches get a pool for teams to use, which would also allow local swimmers a place to practice.

“Port Neches has a swim team, but no swimming pool,” he said. “It would be great if they could build us a swimming pool like Beaumont has. I have a daughter in seventh grade, who will be in high school in a few years. I would like for her to do it in high school and compete with these other schools.”

The coach’s wife, Melissa MacNeil, said the team might compete against a few local teams in the fall, but added nothing was set.