Storm-damaged boat ramps get funding for repairs in Port Arthur 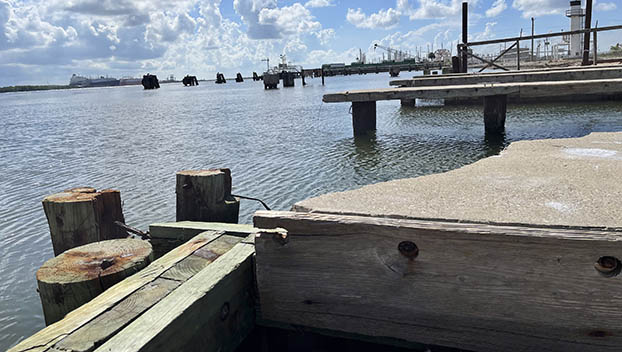 Two Port Arthur boat ramps significantly damaged by extreme weather events soon will be repaired following the securing of funding from multiple entities and donations from a local refinery.

TPW has offered grants for the Sabine Pass and Pleasure Island ramps. In 2019, the department awarded $1,264,692 for the repair of 4 Pier Boat Launch on Broadway Street in Sabine Pass, and Cheniere Energy pledged $125,000.

However, last month it was noted, due to inflation, those funds together were nearly $1 million short of project completion.

City Engineer John Cannatella said the city intended to rehab and redo the three boat ramps at that location, add a fish-cleaning table and install protective devices offshore to prevent commercial vehicles from damaging the ramps.

“It would be a shame for that money to go to waste,” said Mark Viator, port director for Sabine Pass Port Authority. “We’d love to see a match to be able to make sure that boat ramp gets put in place.”

Viator said Sabine Pass has 87 boat slips that are used to access the marina by TPW, the Jefferson County Sheriff’s Maritime Division and thousands of recreational anglers.

“We humbly ask for your support on this so that we don’t lose the funding that’s been donated by (Texas) Parks and Wildlife and Chenier,” Viator said recent to the Port Arthur City Council. “And I just want to thank you.”

Council voted unanimously to grant that support by approving a resolution that reallocates funds from the American Rescue Plan Act to cover the gap necessary to repair 4 Pier Boat Launch. The city received $26,731,836 in ARPA funds and last week voted to move $5 million from Infrastructure, $6 million from Recovered Revenue Loss and $1 million from Broadband Access to cover necessary funds in conjunction with the pier and also the renovation of the new Port Arthur Public Health Department.

A memo dated July 11 from Interim Finance Director Kandy Daniel to City Manager Ron Burton said, there is “no budgetary impact and no impact on fund balance.”

Mesquite Point, located on the south side of Texas 82, will cost $2.3 million to repair. Those funds will come from a TPW grant, $125,000 from Cheniere and up to $650,000 from Jefferson County, which was approved by commissioners earlier this year.

The intent is to “remove and replace the Mesquite Point Public Boat Ramp on the south side of Highway 82 to include but not be limited to: the removal of existing finger piers and boat ramp materials and the construction of new finger piers and ramps,” according to documents from the county purchasing department.

“We are proud to support the reconstruction of two pivotal boat ramps in Jefferson County,” said Maas Hinz, vice president and plant manager of Cheniere’s Sabine Pass facility, in a written statement. “These boat ramps ensure community members have safe access to our waterways and support our local marine emergency services.”

Both ramps are expected to be complete next year.