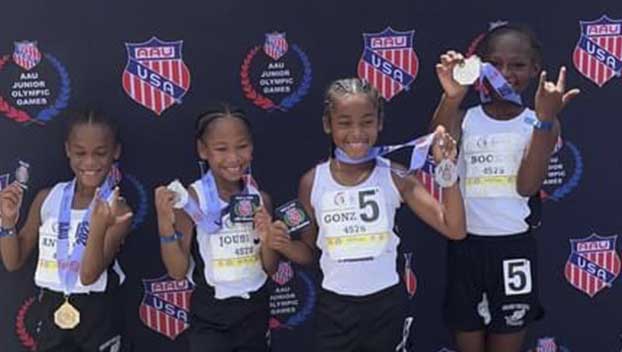 The Golden Triangle Track Club’s 4×100 relay team came in second place at the Junior Olympic competition in North Carolina. It took a national record to take down the Port Arthur team. A team from Desoto took the top spot with a national-record time of 59.03 seconds.

Teryn Antoine, Khloe Joubert, Payten Gonzales and Laila Booker finished in second with a time of 1:02, which beat their previous high by a second.

Coach DeVante Conner is proud of how the team performed.

Booker competed in the 100m and 200m dashes and finished 38th and 52nd, respectively.

Conner said he was happy to see how other coaches and the community stepped up to get the girls ready for the competition when Conner preparing for a new job in Katy.

“I wasn’t able to be there the last couple of weeks,” he said. “I was very satisfied to see the coaches working with them. Coach (Ora) Smith and Coach (Darrell) Granger worked with them. It was cool to see PA legends to work with them, also. They were able to see with their own eyes the future we have in Port Arthur.”

Conner knew the team was facing stiff competition. Heading into the event last week, the national record for a 4×100 relay for that age range was 59.9 seconds. Early in the season, the coach believed his team had a chance to run 1:00 despite falling short of their goal.

“I thought they would be sad and crying,” Conner said. “They were happy and they were such good sports. They were taking pictures with the other teams after the race. They gave hugs, and it was good to see that the top-three teams in that race were all from Texas.”

Conner said the top three teams all ran their fastest times of the year. His team even ran two seconds faster than the preliminary run.

“I am so excited that our community came together for the girls,” Conner said. “The girls came back Sunday, and Coach Smith threw a pool party for them. It was good to see the community celebrate them. I am very happy they had a chance to experience it. Not too many kids get to.”