The Sabine Pass football team enjoyed a relatively high turnout for the summer workouts as coaches and players prepare for their upcoming season.

Junior offensive and defensive lineman Alexander Jackson said the 26 students who showed up for training camp were the most he’d seen during his time with the program. 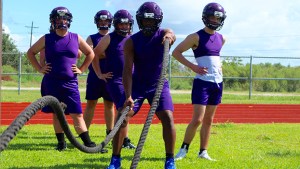 Jackson is playing guard and defensive end for the Sharks, who were not able to compete last season. They hope the large turnout will produce a full season in 2022.

Jackson said he is looking forward to the Sharks’ rivalry game against Hull-Daisetta.

The Sharks begin the season Aug. 26 on the road against Frassati Catholic. Their first home game is against Cristo Rey Jesuit.