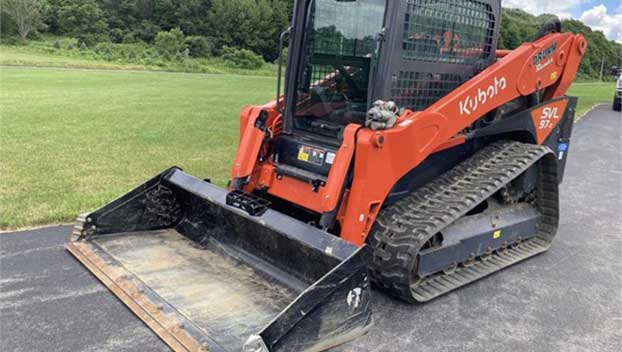 A Kubota skid steer is pictured. A similar model that was stolen from Jefferson County was found recently in Orange County.

A stolen digging, grading and leveling machine worth tens of thousands of dollars has been discovered, but authorities in Jefferson County and Orange County are working to make an arrest.

Orange County Sheriff’s Office Criminal Investigation Division detectives went to 408 Waddell St. in Vidor July 29 after receiving information there was a stolen ATV on the property.

Detectives searched the property and did not locate the ATV but did locate a Kubota skid steer.

The skid steer was parked behind a portable building and appeared to have been done in an attempt to conceal its location, authorities said.

Upon examination of the skid steer, detectives discovered the VIN plates had been removed and ground off.

Orange County Sheriff’s Office impounded the skid steer due to tampering with the VINs.

South East Texas Auto Theft Task Force was then called to assist in investigating the identity of the VIN.

The Kubota skid steer was then confirmed as stolen out of Jefferson County.

This remains an ongoing investigation and no arrest or arrests have been made at this time.

The Orange County Sheriff’s Office encourages the community to report any suspicious activity.