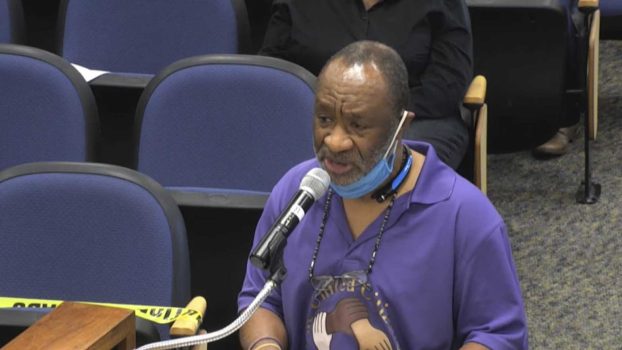 For the second time in less than three months, the speaker for a grassroots group in Port Arthur approached City Council in an effort to change the city’s voting system from majority to plurality, eliminating the need for runoff elections.

The request Tuesday followed the May general election, when neither incumbent Mayor Thurman Bartie nor former CEO of the Port Arthur Economic Development Corporation Floyd Batiste, the top two vote-getters of four candidates, reached more than 50 percent of the vote, requiring a runoff election June 11.

Eddie Scaggs, speaking on behalf of the United Citizens of Port Arthur, asked for city staff to allow for a charter amendment in the November election. Said election would change all current city council term limits from three years to two years, as a three-year term requires majority voting per the Texas Constitution, according to information from City Attorney Valecia Tizeno.

Scaggs’ proposal asked for two-year terms and that no mayor or council member serve more than three consecutive two-year terms in their elected position.

“I know there will be citizens watching over the government channel, etc., and we want them to know that what we’re talking about is a voting system we have right now, which is (a) majority voting system, which is costing the taxpayers of Port Arthur extra money,” Scaggs said. “In our 2022 mayoral election, Port Arthur had four candidates and none received 50 percent of the vote. Out of some 20,000-plus registered voters, only 2,995 voted — that includes early voting and Election Day voting. Because of our majority voting system, a runoff election was required, and 2,776 people voted.”

According to information from Jefferson County, 33,026 residents were eligible to vote in the mayoral election. The number of those that did, including mail-in ballots, was 3,167.

“For our city, the majority voting system is not efficient and not cost-effective,” Scaggs said. “Port Arthur Independent School District, known as PAISD, Drainage District 7 known as DD7, and the Port Commission use the plurality voting system.”

“Our voter turnout has become dismal at best with voter turnout and Election Day voting combined,” Scaggs said Tuesday. “Holding a runoff election makes those numbers worse and increases the cost to the Port Arthur taxpayers.”

Councilman Cal Jones requested the possibility of a committee researching the subject to allow voters and not council to decide on the matter.

Tizeno said the request could be done for the next May general election, but not by November.

The last charter amendment was done in (November) 2020, Tizeno said.

The date applies to when the topic is placed on the ballot, not the date of the election, she said.