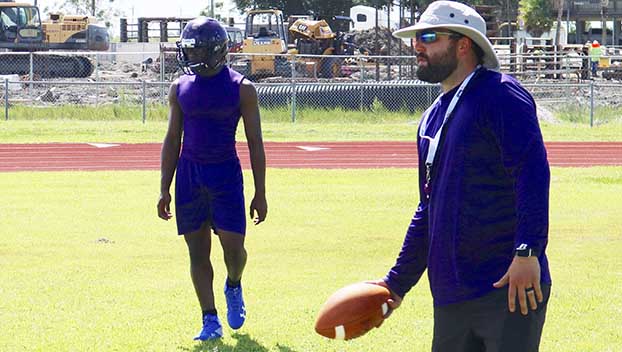 SABINE PASS — The Sabine Pass football team will have new leadership this year as Cody Almond takes on the roles of head coach and athletic director.

“I have been at Sabine Pass for five years,” he said. “I graduated from Sabine Pass. I played football, basketball and baseball here. I came back to where I grew up. I am trying to get it done here. This district has been my whole life from being a baby, until now, I never left this community. We have had good teams in the past. To be able to give Sabine a good football team would mean the world.”

The Sharks have struggled to field a team over the past few seasons, playing only four games since 2019. With 26 student-athletes showing up for the first day of training camp this year, Almond hopes to complete his first season.

Regardless of the record after his first season, Almond wants his players to exhibit certain characteristics.

With low numbers, coaches have to balance generating toughness and making sure student-athletes want to play.

“We want them to work hard,” Almond said. “Just don’t give up. We talk about heat and exhaustion. It is new, but if you come out here and work hard, they will get a good work ethic.”

Almond said his coaching style will be “balanced” in his first year.

“I’ve got two good coordinators with one on offense and one on defense,” he said. “One has been with our junior high team for the past few years. Our defensive coordinator has been busting it to get it done. All of our coaches are on board. We have to set a tone. After that, we will see where it goes.”

With a large number of seniors making up the Sharks roster, Almond said the team’s schemes will be similar to what they used in the past.

“We are going to try and keep some things,” he said. “With it being a new staff, we are going to mix it up a bit. We are going to do some new things on defense. We have some new playmakers that will allow us to open up the playbook a lot more and use that to our advantage.”