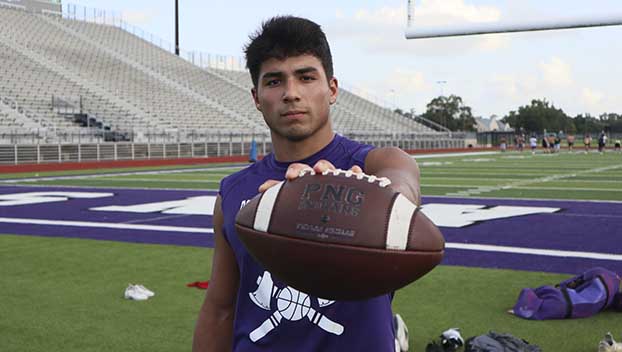 Linebacker Seth Landry is ready to bring his physical style of play back to the PNG defense. (Chris Moore/The News)

PORT NECHES — The PNG football team is less than a month away from taking the field with hopes of building off last year’s deep playoff run.

Linebacker Seth Landry returns to his role as one of the team’s starting defenders for his senior season.

Landry is part of a defense that hopes to see improvement after giving up at least 30 points nine times last year.

New head coach Jeff Joseph wants his team to be known as a physical bunch.

“Seth is a very smart kid, very physical and fearless,” Joseph said. “I don’t know if it is an intimidating thing, but that is the expectation we are trying to send. We are all trying to get to that. We try to be aggressive and make plays, and that is what Seth brings.”

Joseph said Landry works hard and has been consistent in the team’s summer program.

That type of personality typically comes with a bit of edge that Landry must drum up prior to each game.

“I play angry,” he said. “I think most of us do. Me, Nick, Torryan Hinton and Isaac Baker, all of us play hard. For me, I usually listen to music and think about things I messed up in the past. I think about those mistakes and that usually gets me angry and I take that onto the field. It usually works.”

When he is not on the field, Landry can be found hanging out with friends and family or playing video games. He is also dedicated to working out and staying in shape. Landry said his favorite subject is American history.

He has a particular love for football, and all that comes with it. The brotherhood of the team and the pageantry around Texas high school football motivates Landry to perform his best.

“I love the chemistry with the team,” he said. “I like the Friday nights with the band and the fans and cheerleaders.”

Landry and his teammates start padded practices next month with their first scrimmage scheduled for Aug. 18 at home against Little Cypress-Mauriceville. The team’s first non-district game is against Memorial Aug. 26 at PNG.